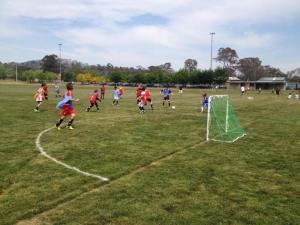 Where U6 to U9s come to play

Weston Molonglo Football Club hosts a dynamic MiniRoos Club football program for our younger players. Teams compete in small-sided games at the same time on Saturday mornings at Waramanga Playing Fields during the winter season from April to September, with breaks over school holidays.

Football (soccer) is easy to learn but can take a lifetime to master. WMFC welcomes those new to the sport, as well as those who have ‘dribbled’ before.

MiniRoos play a small-sided game with fewer players on a smaller field (ie 4 v 4 in U6s/U7s, to 7 v 7 in U8s/U9s). Players have more ‘time on the ball’ and more opportunity to develop their skills. Players enjoy more shots on goal and 1 v 1 opportunities which in turn leads to improved skills and fun. Games are non-competitive with more emphasis on player development rather than winning or losing. Although we do not formally publish a league table for these age groups, the MiniRoos coordinators monitor scores and adjust the later rounds of the draw to ensure teams play other teams at a similar level of skills development as the season progresses.  Teams are usually based on friendship groups or common primary school so players get to know the game alongside friends.

The small sided game rules are very simple and under-regulated to keep the game flowing and the players are engaged for the whole session, not standing around while an adult explains everything to them. The major role of the coach or parent helper for this group is to make the football experience as enjoyable as possible. A team manager helps from the sideline to ensure each squad play receives equal time on the field. See below for the Coaches & Managers Handbook.

Skills develop at different ages, from ‘magnet ball’ in U6s, where all children are gathered around the ball, through U7s where passing is becoming more common. As they move into U8s and U9s, the field gets larger, goal keepers are introduced and the skills develop in each of the players. Natural tendencies of defenders, strikers and goal keepers become apparent.

As the skills develop, the role of the coach changes from on-field advice and refereeing (U6s), to the off-field coaching advice and introduction of a referee (U7s) to minimal off-field coaching and advice (U9s). The main role of the referee for these ages is to ensure the game is played fluently, to instruct and correct players on how to behave and what the rules are (ie free kicks, throw ins etc).

And at the end of the season, all players attend our presentation day where each player is presented with their own named trophy, enjoy the BBQ and sit back and watch the annual Coaches v Referees match.

You can download more information about Club MiniRoos including National Playing Formats and Rules and a Parent Information Pack.

The MiniRoos competition comprises of mixed teams. However, WMFC recognises that by around age 8yrs, girls want a choice. We have a combined U8/U9 all girls, round robin competition with the Woden and Tuggeranong clubs. We still play small sided rules, it is still all about fun and developing skills.

Attached below is the Coaches & Managers Handbook. This handbook is currently under review, however, it will provide guidance to new coaches and managers.