As remembered by Cyril Minge

Lyndoch reformed in 1947 playing in what was the Lower North Ass with teams from , Greenock, Kangaroo Flat, Roseworthy, , and Lyndoch. Lyndoch won three premierships in a row with Jack Filsell Captain then in 1954 that Association finished so Lyndoch Football Club went into recess.

In 1960 Lyndoch started up again this time playing in the Gawler and District Football Ass. Brian, Buck, Harris coached in 1963. I joined Lyndoch as did a lot of players from Williamstown colts. In 1963 - 65 I was honoured to be appointed as Vice Captain. In 1964 with 7 Colts from Williamstown the U17 won the Premiership with Brian (Buck) Harris coach.  The A Grade won a premiership with Kevin Ablay as coach. In late 1968 the Gawler and District Football Association started up as Primary Schools and Mini-league competition with teams from Evanston Green, Evanston Gold, Gawler Primary, Gawler East, , United Rurals and Lyndoch Valley Little League. Lyndoch was sponsored by the Lyndoch Football Club and Williamstown Rovers Football Club. Rurals won the premiership in 1969, then they did not have the numbers to carry on so some of their players came to LVLL. The first coaches were Brian, Buck, Harris, Ivan Dicker and Cyril Minge. The schools that participated in the LVLL where , Williamstown, St Jacobis, Lyndoch and later in 1970.

Coaches I can remember from 1960 - 79 include Brian ( Buck) Harris, Kevin Alby, Frank Howard, Graham Thomas, Lyndsay McGee, Sam Meniel, Lyndsay Turner, Geof Gerlach and Alf Skase.  I had many great years at Lyndoch playing with some great players until 1979 when I retired at age 42. In 1979 Lyndoch and Williamstown had a meeting together with 83 players and supporters present and formed the Barossa District Football Club.

Frequented by ‘locals’ and travellers alike for 145 years, there is plenty of character at the hotel

Lyndoch Motors specialise in the sale and service of Case IH farm equipment and Mitsubishi Vehicles.

New and used cars. Make sure you mention the BDFNC to get a great deal 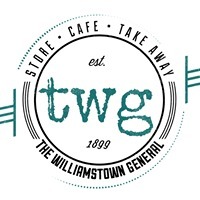 Afterhours Doctors are skilled with extensive experience in general practice. Click on logo.

Coopers of Mt Torrens Farm Supplies is a family run business operating since 2007. Click on logo.

Perrys fuel distributors established in 1949 and family owned. Click on logo for info.