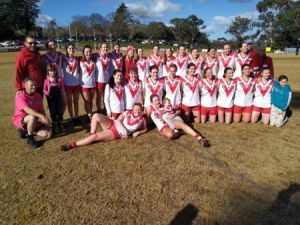 There is an asterisk next to this premiership for the simple reason that 2021 was deemed a year of "Minor Premiers".

Unlike 2020, when no matches were possible, AFL Outer East completed around half it's fixture this season. Unfortunately with the Covid Lockdown extending through September the finals series were abandoned.

However the League chose to acknowledge the hard work put in by players and coaches with a ruling that teams which finished on top , or finished higher ranked in that handfull of grades where finals had commenced, would be recognised as Minor Premiers.

So while 2021 isn't a " flag year" for our women it is nevertheless a season that deserves to be recognised and lauded.

That is a somewhat dramatic outcome to a very colourful story.

It wasn't until February 2021 that former President Helen Wositzky and some other locals began lobbying OFC to enter a women's team in AFL Outer East.

OFC's Sports Managment Group ( our footy and netball managers) supported the move and the rest is now part of the Club's rich history stretching all the way back to 1902.

Simon Gilson, a local who had played communty football in Geelong, was appointed coach.

Doubtlessly the group was on a steep learning curve competing against more experienced teams. In fact in Round One against Begrave OFC failed to score in the first three quarters.

However in a harbinger of the magnificent season that was about to unfold OFC slammed on 3.5 to nothing in a stunning final quarter.

An interesting footenote to this first OFC game was the size of the "red and white crowd" at the Belgrave oval. Many people drove straight to the game after the Senior fixture at Narre Warren.

Covid lockdowns caused immense disruption to the season but it was clear almost every time we played the team was learning and improving.

By the close of the truncated Home and Away season we had climbed to second on the ladder. Somewhat ominously the top team , Yarra Junction, boasted percentage of 430. That was nearly 300% more than OFC.

However, as they say, in finals anything is possible and OFC blitzed the Junction girls holding the Division powerhouse to just one goal for the entire game.

Sadly the finals series was unable to continue and by virtue of that victory, which put us through to the Grand Final, OFC was declared Minor Premiers.

In retrospect it had been a sensational four months for a team that couldn't find the scoreboard in Round One to a side that was clearly the best in it's Division by finals time.

Please click on the PDF below for some season pics.