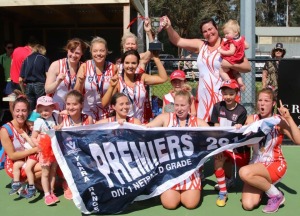 Given the flurry of flags OFC won in the years after 2014 it would be easy for this one to get lost in the mix.

Of course all premierships are significant but D Grade 2017 deserves extra prominence for a number of reasons.

It was the third time in four years OFC had triumphed in this grade which reflected the immense depth of talent at the Club's disposal as well as the success of the OFC netball program.

A stand alone breakthrough win in 2014 would have been sensational for the Club but adding  more flags at D and A Grade levels was concrete evidence that something special was happening.

The other reason this premiership deserves to be lauded is that it was the first of three magnificent OFC premierships on the one day.

(Our Reserves football team lost the grand final by a single kick).

So doubtlessly this was the greatest day in OFC's history and celebrated our football and netball dominance of the Dandenong Ranges, Yarra Valley and Goulburn regions.

Interestingly, as we have seen in previous D Grade seasons, OFC was not the strongest club during the year. Two clubs had superior  percentage to us and even fifth placed Woori Yallock could match us on that count.

But as had happened on two previous occasions, when the pressure was on OFC rose to the challenge.