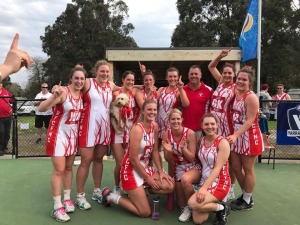 After working so hard for the breakthrough A Grade flag in 2015, and then surrendering the title to arch rival Wandin in 2016, OFC was keen to make ammends.

A key signing was made in the off season when prolific goal shooter Peri Stewart was recruited. She joined Tess Linkins and Ash Howard in forming what is arguably the most potent attack in League history.

Consequently OFC swept the home and away season and headed into the finals undefeated.

Instead of having to conquer regular foe Wandin the girls found themselves facing Woori Yallock and steam rolled their way to a 16 goal grand final win.

OFC fielded a formidable line up in 2017 with League leading players in defence and mid court as well as attack.

However it was apparent a new challenge was on the horizon. Dual premiership coach Tam Luke decided to transition to football.

This meant OFC needed to regroup if it was to hold on to the A Grade crown it had just won back.