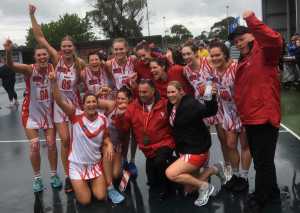 OFC may have won back to back flags in 2017-18 but faced an immense challenge to convert that triumph into a three-pete.

At the end of 2018 AFL Yarra Ranges clubs voted to accept an application by clubs in the smaller South East suburban league to form a new competition- AFL Outer East.

This meant OFC would now come up against powerhouse  teams from Berwick, Beaconsfield, Narre Warren and Cranbourne.

It was to prove mostly a hill too steep to climb for the Yarra Ranges netball and football teams, they generally struggled against the bigger clubs.

However there was one extraordinary exception to this trend- OFC's netball program under the guidance of Tim Smith and his senior players.

Remarkably all four senior teams made the finals, and our new U/17 team was competitive.

Under the circumstances that victory ensured that OFC could lay claim to the title of the best team in the history of the YVMDFNL/AFL Yarra Ranges leagues.