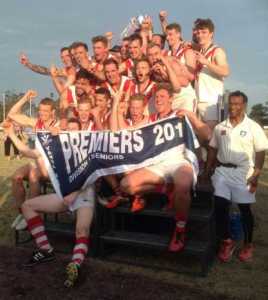 To have an understanding of the signficance of this premiership it's valuable to have some knowledge of events the previous season.

In 2016 OFC established itself as a major contender at First Division level.

The Reserves won the premiership but after beating Healesville in the Second Semi Final by 10 goals the Seniors then lost the grand final to that club.

That match was played at Healesville which put OFC at a disadvantage.

A number of clubs raised objections to the decision to grant a home ground advantage to a team during the finals series. OFC was NOT among the clubs which opposed the decision.

OFC had the view, and continues to hold the view, that we were simply outplayed by a better team on the day.

However the League consequently introduced a rule to prevent clubs hosting finals which featured their own teams.

Incidentally the 2016 grand final was one of many recent examples of the best performed team of the season cruising into a grand final only to find, after a week off, that it struggled on the big day.

In that year the longer the season went the more it became clear that OFC would be a Flag contender.

In the last four rounds OFC had big wins over Monbulk,Emerald, Mt Evelyn and Wandin. However  the one team we couldn't get past was Woori Yallock.

The Tigers beat OFC twice during the season and then in the second semi eased home to a 28 point win.

At this stage no one could forsee the drama that was about to unfold on Grand Final day.

OFC over ran Healesville by an astonishing 15 goals in the Preliminary Final.

On Grand Final day a northerly wind was blowing with such force at Yarra Glen that the U/18 and Reserve teams (including OFC) found it impossible to score into the breeze.

In the first quarter against Woori Yallock everyone at the ground saw that an upset was in the making when OFC kicked 1.6 into the breeze and took a three point lead into the first break.

OFC went on the rampage in the second quarter adding six goals to Woori's three behinds.

After half time there was a lot of one way traffic with  OFC booting another 11 majors to the Tigers two goals.

OFC won by a record 101 points in one of the most extraordinary grand finals in League history.

However there were some significant exceptions- looking at the  finals series vote winners the three best performed players were Marcus Hottes, James Charge and Mitch Bonuda.

All three were recruited to the Club by coach Brendan Donovan and SMG chairman Grant Faull. They became very popular members of the Club as well as team leaders.

While a number of players had been members of the team which won the U/16 and U/18 flags Declan Fitzgerald was the only player from that group's dynamic (best ever?) midfield to feature in the 2017 flag. Declan was among the best players of the finals. Dylan Troutman and Patrick Rosier were playing at a higher level and returned to OFC in subsequent years.

Troutman came home to OFC from Queensland in 2018 and was regarded by many as a potential Mick Scott Medallist.

He added great "run and carry" as well as superb judgement and skills to the half back line.

At the same time a handfull of players who had achieved their premiership goal didn't go on in 2018, including Blake Walter who was probably the best young forward in the League.

Nevertheless OFC was still well placed to make the grand final for a third year in a row.

This pattern was to continue into the finals series when Troutman broke down during the pre match warm-up prior to the second semi final against Wandin.

Then during that match Hottes, who won the coveted League Best Payer award that year, suffered a hamstring injury.

Until Hottes' departure OFC was leading Wandin and appeared set to enjoy a week's rest before the grand final. History shows that OFC would never recover it's momentum and the Club made it's finals exit the following week against Healesville.

2019 signalled the end of an era when the big south east suburban clubs were admitted to our League.

From 2016-18 OFC was probably the League benchmark club. In terms of the competition OFC faced, and the level at which it was playing, these were arguably the greatest ever Red and White sides.