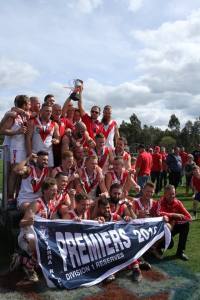 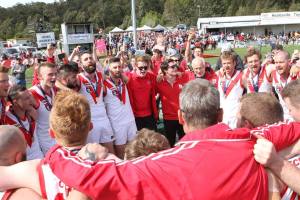 This season had some elements in common with the previous Reserves flag in 2009, although of course on this occasion it was a First Division Premiership.

The three best players during the finals series, Tom Millwood, Daniel Stevens and Chris Brown, had enjoyed considerable success in the Seniors. Brown and Millwood would subsequently return to the Ones in future years, as would the irrepressible Glenn Stevens..

There were also some emerging young stars who had come through the U/18 teams, in particular Lachlan Taylor and Ethan Greenall, who would feature prominently in the 2017 Senior premiership.

OFC finished the season as clear ladder leaders. Our percentage was more than 90% better than the team in second place , Wandin.

But, and this is a very significant "but", there is traditionally a major movement of players in Reserves teams before the final series as Club's without Seniors challenging for the Flag invariably "load up" their Seconds with good players.

While this is always done within the rules it does make it very difficult for a Club to run  successful finals campaigns for both  the Firsts and Seconds.

OFC, Wandin and Healesville , the three strongest teams in the Reserves competition during 2016, also had Seniors playing in the finals.

However MtEvelyn, in fifth place, was able to qualify some strong players for their Reserves campaign and won through to a Grand Final against OFC, on the same day our Firsts were playing Healesville.

If you check the ladder below you'll notice that OFC's percentage was about 150% more than Mt Evelyn's, but in September , under the conditions outlined above, that meant little.

In the first quarter OFC had nine scoring shots to one and although we were favoured by a strong wind accurate kicking should have set up a victory. Sadly we booted 2.7.

Mt Evelyn clawed their way back into the game and two teams were separated by barely one goal at three quarter time.

It wasn't until Brady Schubert kicked his fourth goal of the game that OFC breathed easier and prepared to celebrate our first Reserves flag at this level.

This team would go on to play in the grand final again the following year , and once more made it to the last match of the season on the same day the Firsts were also competing for the Flag.

We lost narrowly to Wandin but merely making the Grand Final under those conditions underlines the amazing player depth OFC enjoyed during this era.