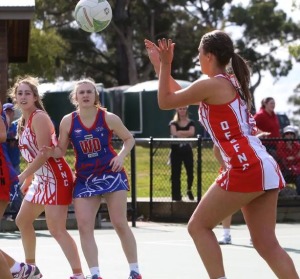 OFC had been competitive in the lower grades most years but the Club struggled at the elite level against teams that had contract players.

All that was to change with the Club decision to commit more resources to OFC netball.

It was a momentous decision which was to usher in the most dominant era of any club in the YVMDFNL.

Tamara Luke, who had played with the Kestrels, was signed as coach with Ash Howard as her assistant.

Ash was previously a star with the Melbourne Vixens.

Tam proved herself to be an exceptional leader, and defender, while Ash fitted perfectly into the support and goal shooting roles.

They were to prove a formidable combination.

They were also adept recruiters and attracted local stars such as Krista Tomlinson and Tess Linkins to OFC.

Consequently the Club gained considerable "depth of talent" and on the same day as OFC A Grade clashed with Wandin in the Grand Final our C and D Grade teams also figured in the Big Dance.

Having said that it took a considerable effort to dethrone powerhouse Wandin. The Bulldogs led OFC at three quarter time in the A Grade grand final and they were to prove the following season they were far from a spent force.

Grand Final Replay (online) - you will find a link to the match in one of the PDF's below.

You will also find a Grand Final preview and pics.