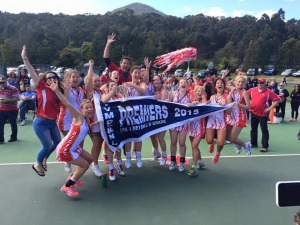 After the breakthrough OFC netball flag in 2014 the question became could we build on that success ?

At a minimum that meant D Grade had to successfully defend it's flag.

This was a difficult goal given that some other clubs found it tough to compete at the A Grade level and placed a greater emphasis on the lower grades.

To go "back to back" OFC would also have to overcome arch rival Wandin, which had emerged as the powerhouse of YVMDFNL netball.

Note the 2015 ladder- again OFC was not the strongest team in this grade, based on performances across the season, and had to lift for the finals series.

Player of the Series-