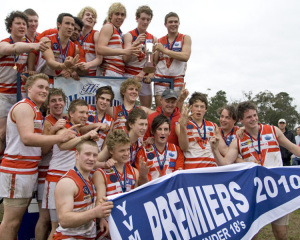 Keen observers of OFC teams during this period will note than many of the names which featured in the 2009 Premiership team re-appear in the 2010 campaign.

That's because this exceptional group of players were already imposing themselves on the competition in their first year out of U/16s.

Indeed two members of this 2010 team, Patrick Rosier and Declan Fitzgerald, had played in the 2009 Senior premiership team!

While OFC was able to field a more mature junior team in 2010 there were also some significant additions including ruckman Brayden Shaw, pacey half forward Tom Stalder and the versatile big man Luke Hill.

Hill would go on to play a pivotal role in the great OFC senior teams of the 2016-18 era.

A final addition to the team was Lachlan Meadows, younger brother of Mitchell. Lachlan was in the Eastern Ranges program and added extra height and composure off half back.

During the course of this season OFC incredibly exceeded 100 points on nine occasions and twice scored more than 200 points.

Interestingly the full forward Blake Walter was missing, he was playing in the seniors that day. Small forward Luke Van Leirop kicked 17 goals.

OFC finished the season with an extraordinary percentage of 337, However a quick perusal of the ladder below shows Healesville in second place with a percentage of 336 !!

Our only loss during the season had been at home to Healesville.

OFC prevailed in the second semi final against Healesville ( at Healesville). It was a gritty but far from conclusive five point win.

Two weeks later we played them again in the Grand Final, this time on neutral territory, and triumphed by 12 points.

But the scoreboard doesn't adequately capture the drama of that day.

Healesville had three more scoring shots than OFC, and they were only down by nine points at the last change in a match that could have gone either way.

While there were many high points in this fast and furious junior encounter perhaps the stand out moment was a last quarter goal from Hill when he took a set shot from outside the 50m arc. The goal gave OFC breathing space and helped this superbly talented group of players to "back to back" premierships.

Player of the Finals Series-