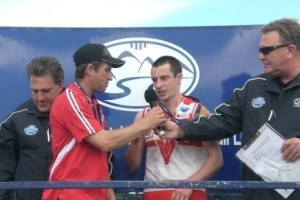 After a devastating 2008 season in First Division a number of former players returned to the Club and strengthened the Seniors as OFC dropped down to Second Division.

Simultaneously OFC could draw on arguably the greatest group of junior footballers to ever wear the red and white jumper.

Consequently some players who had been in the Seniors in 2008 now found themselves adding considerable depth to the Reserves team.

All time greats, the veterans Andy Greenall and Tim Scott, also provided skill and extensive experience to this team. Those two, along with Garrat McDonald who played in the grand final side, boasted seven Senior Best and Fairests between them.

The premiership was a fitting reward for skipper Liam Riddiford and the small group of players who had "toughed it out" in 2008.

Remarkably this was OFC's first Reserves premiership, which is probably reflective of the difficulties a small Club has in building player depth.