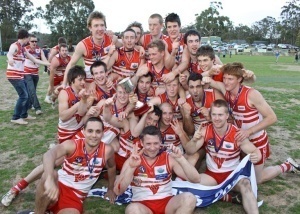 After a tumultuous 2008 season when OFC finished on the bottom of the First Division ladder we found ourselves back in the lower division for the second time in five years.

It was tough demotion for a proud Club to accept but remarkably it opened the door to the most impressive season in OFC history and set the scene for an era of exciting success.

Some very important factors worked in our favour heading into 2009.

OFC's most decorated player, Michael Scott, agreed to stay on as coach and skipper Scott Tregoning ( after winning the Division One Best Player award) rejected overtures from other Clubs.

Simultaneously a number of players returned to the Club just as we began to benefit from the maturing of the best crop of junior players in OFC history. Three of those boys, Dylan Troutman, Patrick Rosier and Declan Fitzgerald played in the Premiership side. All three were still eligible to play U/18s and it was a significant bonus that the juniors won the Flag on this day without them.

In retrospect it was a team that would probably have been competitive in Division One and it cut a swathe through the Division Two competition, with one very important exception.

Before we come to that "exception" we need to take a quick snapshot of the 2009 season as it unfolded. OFC kicked more than 100 points in every match except one. One four occasions we topped 200 points including a season high 41.20.266 against Belgrave.

We also registered over 200 points in a match at Yarra Glen. In two games against Yea we booted 71 goals to the opposition's 11 majors.

However those extraordinary scores would  mean little if we couldn't win the Grand Final and that situation was brought into sharp relief in Round 14 when, playing at home barely a month out from the finals, we suffered a shock loss to Kinglake.

It was OFC's only defeat of the season and the jubilant celebrations among the Lakers after the game were a clear indication that they now believed they could win the Flag.

However, although the Lakers were in second place on the ladder, and obviously the other stand out team in this Division, their percentage was nearly 70% less than OFC's.

That "percentage difference" was reflected in the Second Semi Final results when, although competitive, Kinglake still lost to OFC by 23 points.

But still, in the Lakers minds, this showed OFC was "gettable" and their confidence received a major boost the following week when they thrashed Seville by 10 goals in the Preliminary Final.

So on Grand Final day Kinglake was "cherry ripe" while OFC had played only one game in a month, the Second Semi win a fortnight earlier.

These factors surely played a role on the day because the crowd was treated to one of the great grand finals in League history.

With the strong breeze at their backs the Lakers slammed on 5.7 in the first quarter while holding the Bloods to just 1.2. Even allowing for the wind it was still an impressive opening by The Lakers and signalled to everyone that it was "game on".

OFC hit back in the second quarter but still trailed by three goals at the last break.

The final 30 minutes of the match were electric. With thousands of sreaming fans in attendance OFC  booted four goals but Kinglake was able score a rare major against the wind. The Lakers held a slender lead with minutes left on the clock before David Noorda popped up with his second goal of the day.

It was an extraordinary victory, every bit as good as the most famous victory in OFC history- the 1966 "one kick win" over Wandin.

The Flag also capped the most remarkable day ever for OFC when our U/18s and Reserves also saluted.

There had never been a Grand Final like this one in League history, and it's unlikely there'll be another one.

Because of the Black Saturday bushfire disaster the media had taken a keen interest in Kinglake's fortunes on the footy field.

Indeed the first community event after the fires had been the "Rising from the Ashes" round one clash against Emerald, which was attended by Premier John Brumby and Federal Minister Peter Garrett (who sang the National Anthem).

Consequently there was huge public support for Kinglake not just across the community but throughout Australia.

Prior to the game, in a solemn ceremony, balloons were released for each of the Kinglake people who perished in the fires (and in a remarkable coincidence a balloon was also released for OFC player Michael Wilson who lost his life in a housefire that season)

Prime Minister Kevin Rudd visited both rooms before the Grand Final and watched the entire match. Melbourne legend Jim Stynes also attended. Jim was battling cancer at the time, and had been in hospital.

After the game Channel Nine did a live cross into it's News service from the ground.

There had never been a day like this in League history and it compounded the "sense of occasion" enjoyed by OFC players and fans as the Club celebrated it's Premiership "triple triumph".

You can read more about the day on this site at History Timeline/Archive.

Please also click on the PDFs below for pics.