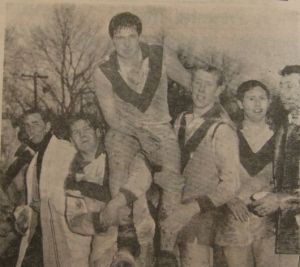 After such a convincing Grand Final performance in 1965 the question was "could Olinda-Ferny Creek maintain the momentum?"

Even so there were few signs during the season that OFC were favourites to go back to back.

We finished third on the ladder, behind Norwood (High School) and Wandin after losing four of the first seven games.

Significantly OFC steadily improved and beat both Norwood and Wandin late in the season.

We then disposed of old rivals Coldstream and Norwood in the finals and set up a showdown against Wandin.

In probably the most exciting Grand Final the club has ever played we won by a point, with the last kick of the game.

Please click on the PDF below to read about this extraordinary game and it's fairytale finish.

Historical Perspective- could OFC keep this group together and go on to enjoy yet more finals success? To find out proceed to the next year, 1967