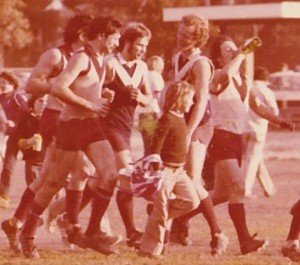 Derry Robertson, a former MDFA Best and Fairest winner with the Emerald club, was in his second year as OFC Captain/Coach in 1978.

By this time OFC was back in Third Division of the EDFL.

OFC had also benefited from recruiting the Koelewyn brothers from Monbulk,rover Mick Henderson from Mt Evelyn and centreman Danny Hanlon from East Ringwood.

An unusual feature of the season was the massive scorelines kicked by OFC, and at times by our opponents.

We scored over 100 points in 12 of the 18 games. Three players, Henderson, Hayne and Grimes, kicked over 40 goals.

However the Zebras had their colours lowered in a July trip to Olinda when the home team scored two late goals on the back of controversial decisions involving the veteran Hayne.

Subsequently Forest Hill's season lost momentum and OFC thrashed them by 72 points in the Second Semi before accounting for a plucky Coldstream in the Grand Final.

Historical Perspective- the core group of this team went on to have a major impact in EDFL Second Division under David Quinn.

In particular OFC kicked 9.20 to lose a Second Semi against Blackburn  in 1980 and the following year went a step further, losing a Prelim to Doncaster. It was an ill-tempered match that many thought OFC could have won and earned a shot at promotion to First Division.