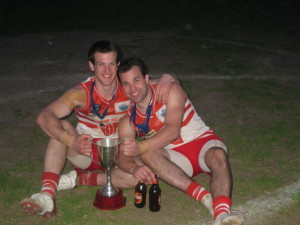 Saturday 12th September 2009, was Yarra Valley Division 2 Grand Final Day and it saw Olinda Ferny Creek teams participating in all football games. There were so many different scenario's facing the club, it was really quite a daunting thought. The U18s were raging favourites to take out the flag, the first one in this age group in our clubs history. The Reserves were also aiming for the same piece of history, having never even made a Grand Final before. And of course, the Seniors were coming up against sentimental favourites Kinglake (and a huge groundswell of support). The day was going to go either one of two ways; an absolute disaster or the greatest day in the clubs history. I am very pleased to report that it was the latter that prevailed.

The 18s took on the inform Emerald unit, who were fresh from toppling the highly fancied Seville side in the previous weeks Preliminary Final. Conditions at Woori Yallock were very hot and very windy to one end. The Bloods kicked with the wind in the 1st quarter and made the most of it leading 6.4 to 1.0 at the first break. Finding conditions alot tougher in the 2nd term, the boys managed to kick 2 goals against the wind while Emerald kicked 4. The boys held a 3 goal lead at halftime and thought that if they could break the game open in the third term with the wind again, the should be able to hang on. Things didn't exactly go to plan though, Olinda kicking only 7 points for the term to Emeralds 1 goal and there were certainly some worried looking people, knowing that a 3 and a half goal lead against the wind was going to be a massive ask. As they have done all year though, the boys stuck to the task and outscored Emerald 3 goals to 1 to convincingly win this years premiership, 11.14.80 to 7.7.49. Blake Walter finished with 4 majors, Luke Van Lierop finished with 2, and the skipper, Owen Raszkiewicz finished with 3 goals and the VCFL Medal for Best on Ground. Congratulations to Coach Andy Greenall and his oustanding team, a very historcal day as our 1st ever U18 premiers.

The Reserves took to the field with possibly the strongest ever 2nd 18 side we've ever assembled. With Yarra Glen having the ability to drop some senior players back for the finals, the 2nd Semi Final was a tight contest. And having beaten Kinglake the week before by less than a kick, this game was going to close and fiercely contested. Kicking with the wind in the 1st term, the boys got out of the blocks well to take a 5 goal to 2 lead at quarter time. The game was always going to be won and lost around the ability to be able to score into the wind. Olinda squared the 2nd term with Yarra Glen with 3 goals apiece to keep a 3 goal lead at halftime. The boys felt confident that they could out run their opponents in the 2nd half and just had to continue to wear them down. We certainly went out and played some terrific football in the 3rd term but missed an opportunity to ice the game kicking 3 goals 7 to Yarra Glens 1 goal. With a 33 point lead at the final change, the last term played itself out with both sides kicking 3 goals each and the Bloods finishing with a 14.11.95 to 9.9.63 victory. Again, a very historical moment with this team becoming Olinda Ferny Creeks first ever premiership Reserves side. Mark Stevens finished the day with 4 goals, Adam Borg got 3 and Tim Scott and Frank Maaskant finished with 2 each. Brent Green was again in outstanding form and Simon Leone was rewarded with the VCFL Medal for Best on Ground. Shane Colee, in his first season of coaching has guided his side to a flag, an amazing effort for the 2005 Premiership player. Well done "Keithy"

And onto the Seniors. As if the side wasn't under enough pressure already, playing in a Grand Final, the Prime Minister in attendance and 99% of the population wanting us to lose, there was only one piece of the jigsaw left to complete the sweep, victory over Kinglake. The Bloods kicked against the strong wind in the 1st term and for ten to fifteen minutes, really held sway and were strong defensively. In the last 7 minutes of the quarter though, Kinglake broke the deadlock and slammed on 4 goals to take a 4 and a half goal lead at the first break. Kicking with the wind in the 2nd, the boys took their time to get going but in a repeat of the first term, they slammed on quick goals to take a slender 7 point lead going into halftime. They say the third term is always the "premiership" part of the game, and although we didn't set the world on fire, we managed to kick a goal and hold Kinglake to 5 goals. This kept us within 3 goals and within striking distance. Disaster struck early in the final term when The Lakers got the first goal and lead by 24 points. For 15 minutes, they dug there heals in and we could not manufacture a score. With 7 minutes to play, and some positional changes made, the tide finally turned our way. The experienced heads got together to produce an absolutely stunning end to the match which saw the Bloods kick 5 unanswered goals and record a 6 point victory, 12.12.84 to 11.12.78. The scenes that followed had to be seen to be believed. Most of the crowd had not heard the siren and only realised it had sounded when they saw players either celebrating, or lying on the ground disconsolate. The Olinda boys were mobbed by hundreds of emotional fans who had just witnessed one of the very great Yarra Valley Grand Finals of all time. For the winners, George Azzam kicked 3 goals and Dave Noorda finished with 2 (all clutch goals). However it was the youngsters, Pat Rosier and Dylan Troutman (all still eligible for U18s) who impressed and Glenn Stevens was awarded the VCFL Medal for Best on Ground. Mick Scott would also like to say how pleases he was of the entire playing list and consideration the expectations placed on the senior guys with all the media coverage he could not have prouder of them.

In the hours and days that followed, the celebrations were long and loud. One very special moment was on the Saturday night when about 90 people, players, officials etc all went out on the ground under lights, linked arms to make a huge circle with the three cups placed in the middle and our Mickey Wilson poster, and sang the club song as loud as we could. Other highlights from the weekend included the Sunday afternoon at The Mt D and Monday at Kate Kelly's where the entrance fee was that you must be wearing a dress. All involved have gained fantastic memories from the weekend that will last a lifetime.

So there you have it, we achieved what we are calling "The Triple Crown". It was done by Woori Yallock in 1984 in Division 1 but has never been achieved in Division 2. It will be remembered as our finest hour and will definately take some time to sink in. Well done to everyone involved on the day and throughout the season. Every contribution, minor or major has helped make this dream a reality !