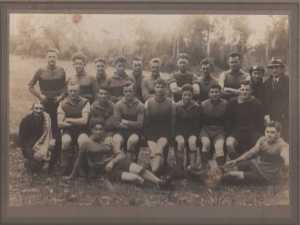 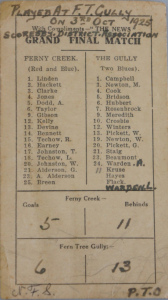 Ferny Creek played in five grand finals in a row in the early-mid 1920s- but only brought home the flag on this one occassion.

In 1925 Ferny Creek lost to Fern Tree Gully by seven points. We have the original team list from that day.

The PDF article also has the names of the entire 1924 Premiership team.

The scores indicate what a powerhouse team Ferny Creek was able to put in the field in the mid 1920s. It included two big men who had played at Footscray - John Sands and Henry Linden.