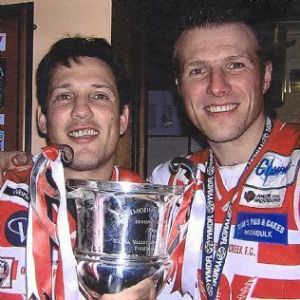 WHEN it comes to winning club championships, brothers Mick and Tim Scott have an imposing record that may well be unsurpassed, especially in the past two decades.

Together, they have won 13 club best-and-fairests at Olinda-Ferny Creek Football Club, including 11 in a row from 1995 to 2005.

They are still active, too, 39-year-old Mick as the Bloods' senior coach and reserves rover and 34-year-old Tim as club secretary.

"We've always loved sport, footy and cricket and were always doing one or the other," Tim said.

"We followed in the footsteps of our big brother Steve.

"He was a cricketer, really, but he also played 200 or so games with the club in the seniors and reserves. All three of us are life members."

Except for brief times away, Mick with the Carlton under-19s and Tim at Springvale, the pair have played almost all their football in the Yarra Valley Mountain District league.

Both have been regular representative players, too, Tim captaining Yarra Valley in 2001, having previously led the under-18s in 1993.

Tim said one of the strengths of the club had been the presence, since 2006, of the netballing girls.

"They bring so much to our club environment," Tim said.

"Having the girls on board is the best thing that has happened to us. Other clubs say the same thing too.

"Olinda wear a variation of the old South Melbourne jumpers and are keen to jump back into first division of the league, having been relegated last year.

"We're looking to be competitive and give kids a game of football.

"The times are tough for many of us but Saturday is always a joy to see so many people around the place supporting and involved.

"We were luckier than most with the bushfires, so having the opportunity to resume footy again brings a normality back into all our lives, which is so important."

Among the former star juniors back at the club for the opening rounds are James Reid, Ben O'Neill and the Stevens brothers.

"We're promoting kids and developing from within our own backyard," Tim said.

"We are a very young list in both netball and football and will continue in this manner to help sustain us deep into this century."