A brief history of other local football leagues / associations that the Greta F C were affiliated with between 1900 to 1945.

(Greta F C competed in this competition in 1906)

* Greta South won the minor premiership in 1910, thus had the right to challenge Glenrowan again, if they lost the first grand final !

(Mt. Pleasant was situated 14 Km from Benalla at the corner of Samaria & Arnott Roads, Karn. Greta South F C participated in this competition in 1912)

In 1914, Winton lost the semi final to Greta but as minor premiers, Winton where able to challenge Glenrowan, who won the first grand final against Greta. Winton then defeated Glenrowan in the 2nd grand final & were declared Premiers!

Greta played in the Glenrowan & District FA in 1929. 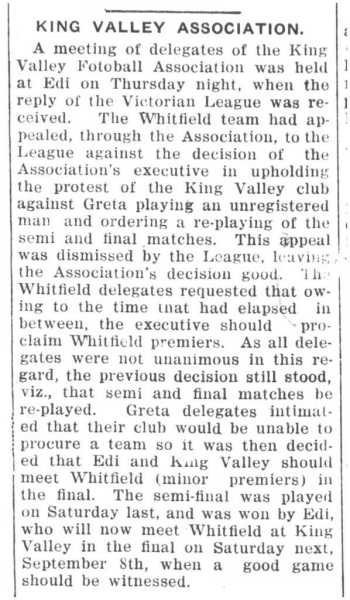 * - In 1933, Thoona protested against Swanpool playing an ineligible player. Swanpool was offered the chance of replaying the Grand Final, but refused. Thoona was then awarded the premiership.

# - In 1934, Benalla All Blacks won the first grand final, then Glenrowan FC protested against an unregistered player. Tatong then defeated Glenrowan in the 2nd grand final !

Greta F C entered the Ovens & King F L in 1945 & have been affiliated with it ever since !

1911 -  Lake Rowan won the minor premiership & had the right to challenge Wattville after losing the 1st grand final.

Greta F C entered the Ovens & King F L in 1945 & have been affiliated with it ever since !