GRETA FOOTBALL CLUB PLAYERS WHO HAVE GONE ONTO PLAY

Arguably the club's most famous playing product was Ian Montgomery, who played for Greta between 1960 and 1962, representing the O & K F L senior representative side in 1961, as a 17 year old, then spending a season with Wangaratta in the Ovens & Murray F L, before heading down to the Collingwood FC in 1964.

Montgomery, in 1965, broke into the Collingwood side (coached by Bob Rose) for the first time in round six and played every game for the rest of the year, including two finals. He made 17 appearances the following season and played from the back pocket in the 1966 VFL Grand Final, which Collingwood lost by a point.

After two more seasons at Collingwood, Montgomery embarked on a coaching career and was the first ever coach of Rythdale-Officer-Cardinia in 1977, which played in the South West Gippsland FL. He also spent some time as an assistant coach at Dandenong in the Victorian Football Association.

A tough, reliable defender/utility recruited from Wangaratta. His stamina and running ability made him a good player for North Melbourne and he thrived on confidence.

He developed into a handy tagger, but his form waned in his last two years at Arden Street. Traded to Geelong, he slotted in well at his new club.

Profile from 'The Encyclopedia of AFL Footballers' 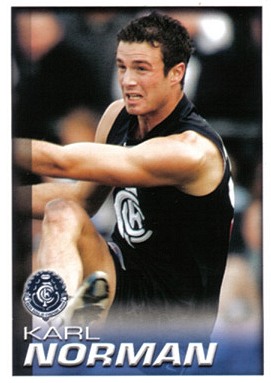 Karl originally played in the Ovens & King F L with the Greta F C Third 18 in 1997 & making his senior debut with Greta F C in 1998. Karl later followed his step father Andrew Smith over to Glenrowan F C in the O & K F L in 1999, when Andrew was appointed assistant coach. Karl then headed into the Ovens & Murray F L with the Wangaratta Rovers in 2000, playing in the Under 18 (WRFC Thirds B & F Winner) and also making his senior O & M F L debut in 2000. Interestingly, Karl played on Steve Johnson (now at Geelong) against Wangaratta FC in the 2000 O & M F L U/18 Preliminary Final. Karl then went back out to Glenrowan in 2001, winning their senior B & F, before heading back to Wangaratta Rovers in 2002, where he became the premier centre half back in the O & M F L, playing a stellar game in the 2002 senior Grand Final, before being drafted at No.79 in the Natrional AFL Draft to Carlton F C in late 2002.

Karl Norman was only on the Carlton list for 3 seasons, but had a controversial stay. Norman immediately caught the eye of Northern Bullants watchers with his long kicking, aggression on the ball, and arm tattoo. Over his first two years at Carlton, Norman was seen as a shining light in the development of their key position players with strong performances in the seconds and some great early games at Carlton in 2004, leading to a National Rising Star nomination in 2004 after an amazing rebounding game against the Cats.

Unfortunately, Norman was also in the press for personal reasons - a newspaper report about being late to training, another about alleged damage to a rental accommodation, and for an all-nighter with Laurence Angwin in early 2004. There is always rumour in football, but it's clear somewhere along the lines that Carlton gave up on more chances for Norman early in 2005, and he stayed in the Bullants - still performing - until ultimately delisted at the end of 2005.

The Western Buldogs were apparently keen on Karl doing a pre season with them in the summer of 2005/06, but for some reason it did not eventuate.

Norman will be remembered as one who had heaps of ability, but probably did not make the most of his opportunities at AFL.

Karl played with Mooroopna in 2006 & 2007 in the Goulburn Valley Football League. He is now a well established, mature senior player & the premier ruckman in the O & M F L with Wangaratta Rovers FNC in the Ovens & Murray F L, where his father, Steve kicked  1016 goals in a stellar career 242 game career!

Karl's grandfather, Terry "Rinso" Johnson was a premiership player at Wangaratta FC & coached the Greta F C seniors back in 1962.

VFL / AFL PLAYERS WHO HAVE COME TO THE

2. Jim Hallahan was originally from the Rutherglen FC & finished 3rd in the 1933 Morris Medal, won by Bert Carey of Wangaratta FC.

7. Craig Patrick was selection No.35 to North Melbourne in the 1988 national draft 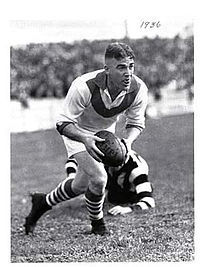 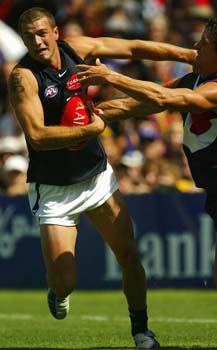 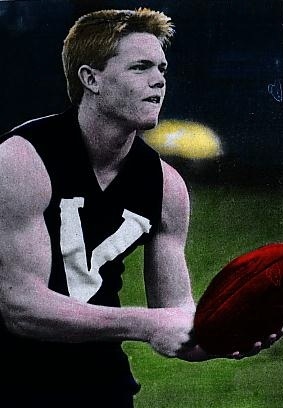