One of country Victoria's most successful teams does not even have a home town.

A team known as Greta South played in the King Valley Football Association a century ago;

a 1910 Greta South team photo now hangs on the wall of Greta's clubrooms. Footballers from the

Greta district, which is 20 kilometres south-east of Wangaratta, combined in various forms before

the Greta Football Club was formalised in 1945, just after World War II. The club played in the

Before World War II, teams from Greta played in the King Valley Football Association, the

Fifteen Mile Creek Football Association, the Benalla and District Football League and the

Glenrowan-Thoona Football League. Since 1945, the Greta Football Club has played in the

Greta first played in McKenzie's paddock, opposite the Greta cemetery. After bushfires had raged

through the area in 1952-53, the Greta Recreation Reserve was created from a paddock next to the

Greta-Hansonville hall and the club moved there. There is no township of Greta; it is a farming district

that is occasionally referred to as Kelly Country because it was the home of Ned Kelly.

The Greta Football Club is one of only a few remaining clubs that is not based in a town.

In the club's early days in the Ovens and King league, Greta wore a navy blue with light blue vee jumper.

Soon afterwards, it swapped to purple with a gold monogram. In 1986, the club swapped to Carlton's

navy blue with a white monogram. Greta's nickname is the Blues.

Wangaratta for a salary of £12 per week, four times the wage he would have received playing for

to cover his family's expenses, and in so doing, became one of the first fully professional Australian rules football players.

Nash not only led Wangaratta to a premiership but, as a favour to a friend, also coached another

country side, Greta in 1946, leading them to a premiership in the Ovens and King Football League,

season. Nash is still remembered in Greta for placing a football in a cowpat and placekicking it over a

to premierships in one season. He coached Ovens and Murray club Wangaratta at training during

the week and on Saturdays; on Sundays, he ventured out to Greta to guide the Ovens and King

1946 captain, Fred O'Brien, did much of what would be considered the coaching duties, but no

one can deny Nash's place in the premiership records. "He's in the picture as coach," Wallace said.

Nash trained with South Melbourne during the 1946 pre-season, Wallish, p. 259,but ultimately retired from VFL football to accept

a position as captain-coach of theOvens and Murray Football League side Wangaratta for a salary of £12 per week,four times the

wage he would have received playing for South Melbourne.The high wage also meant that Nash was not required to find

additional employment tocover his family's expenses, and in so doing, became one of the first fully professionalAustralian Rules

football players.
Nash not only led Wangaratta to a premiership but, as a favour to a friend, also coachedanother country side, Greta in 1946,

leading them to a premiership in the Ovens and KingFootball League, becoming one of the few people to have coached two

p. 91, 28 July 1997. Nash is still remembered in Greta for placinga football in a cowpat and placekicking it over a tall gum tree.

In 1947, Nash was appointed captain-coach of Casterton, in western Victoria. He took Casterton to a grand final that season,

losing by a point. The grand final would be Nash's final official game as a player, although he did play in charity matches forsome years.

In the last quarter of the 1954 grand final between Greta and Chiltern, umpire Alan Arvidson blew time-on

so often that the final minutes seemed to drag on forever. Many spectators left the Tarrawingee oval,

believing that Chiltern had won, before Greta staged a dramatic comeback. In the 44th minute, just before the siren,

Greta centreman Bernie Greenwood, a primary school teacher and one of only a few non-farmers in the team,

Jim Lappin, explained that they were forced to take their cue from the umpire, but Chiltern's anger over the

result lasted for decades. John Tanner, a defender in Greta's 1954 premiership team, who is now 71, said:

"There was bad blood between Greta and Chiltern from that day on".

Lionel Wallace, a centre half-back in Greta's premiership teams in 1946 and '54, is said to be one of  the

greatest player in the history of the Ovens and King competition. As a young serviceman during World War II,

Melbourne. "They reckon 'Liney' never gave him a kick," John Tanner said. After Wallace had returned to Greta,

would leave the farm and play in Melbourne.

Prior to the second World War Greta participated in a number of different competitions, including the

King Valley Football Association, where a Greta South won a premiership in 1910, the

Glenrowan-Thoona Football League, and the Fifteen Mile Creek Football Association.  In the years

leading up to the outbreak of war, the club was a member of the Benalla and District Football League, but when football resumed in 1945 it had joined the Ovens and King competition, in which it has competed since.

Greta quickly made its mark in the OKFL, winning a premiership in only its second season.

Coached by Fred O'Brien, it overcame Myrtleford by 9 points in the 2nd semi final, and again in the

grand final when straight kicking was the key to its success.  Greta won that grand final by 27 points,

employed as coach of Ovens and Murray Football League club Wangaratta at the time. Greta regularly

contested the finals over the ensuing decade, but only once, in 1954, under the coaching of Ken Bodger,

was it successful in claiming a premiership.   The mid-1960s saw the Blues embark on their most sustained

period of success to date, contesting five consecutive grand finals between 1964 and 1968, for flags in the

The early 1970s saw Greta continuing as a regular premiership threat without managing to break through,

but then in 1976 the side failed to qualify for the finals for the first time in eighteen seasons.

the 2nd semi final encounter between the teams by a point.

Geoff Lacey, who would go on to win a Baker Medal in 1984, was in the first of an eventual three

season stint as captain-coach, but he proved unable to build on the 1980 success.  Indeed, although the

Blues fielded some talented teams over the course of the remainder of the decade, it was to be 1993

before they again went top.  Opposed in the grand final by arch rival Chiltern, Greta was really only

supposed to be there to make up the numbers, but ended up winning at a canter by 66 points,

In addition to its 9 senior flags, Greta has won reserves premierships on 4 occasions.

In both 1965 and 1999 it achieved the 'double' of senior and reserves premierships in the same year.

Arguably the club's most famous playing product was Ian Montgomery, who played for Greta 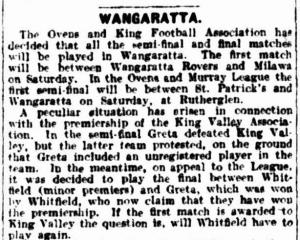 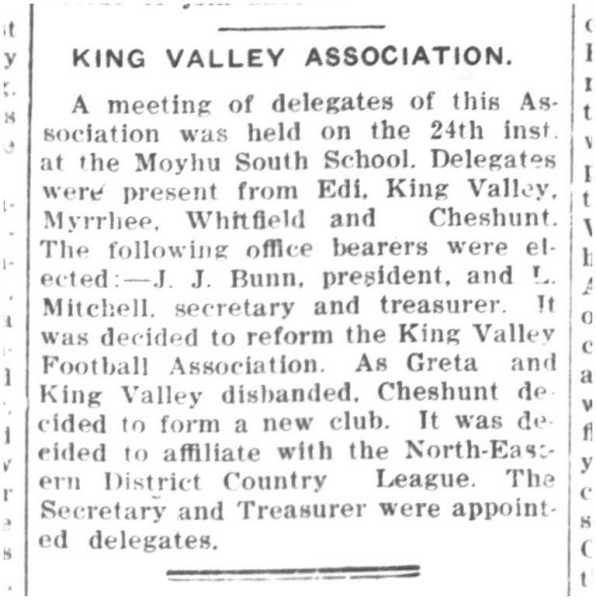