WE ARE NOW AT WWW.BENTLEIGHFC.COM

WE ARE NOW AT WWW.BENTLEIGHFC.COM

Tweet
Message to all players from Shooter regarding subs.
Hi all,
For those that weren’t at training last night, and/or chose not to listen, I have decided not to enforce the “Payment of Subs” rules for this week, given that I haven’t spent a lot of time at club recently & players may not have had an opportunity to make payment and/or arrangement.
For those that aren’t aware, rules surrounding payment of Subs for this year are as follows:
COST
Seniors         $350.00
Under 19's           $200.00
To be eligible for selection, from Round 2 onwards, players must:
Please note that I have worked in “Collections” for 15 years, so I know that these sorts of conversations can be uncomfortable for some people.  Please rest assured that all arrangements will remain strictly confidential and will be handled with the utmost compassion/discretion.  I will not “judge” anyone’s personal circumstances.  Executive Committee has granted me full autonomy in deciding whether arrangement is suitable (i.e. Executive Committee is not advised of individual arrangements that I have agreed to).
To give you an idea of where your money goes, we collected approx. $20,000.00 in subscriptions last year. Cost to the club to field 3 teams in SFL (i.e. umpires, team registration, insurance etc.) this year is approx. $34,000.00.  As you can see, Subs doesn’t even cover SFL costs, let alone the costs (i.e. trainers, coaches, equipment, medical supplies) of what I believe is the best Football Department in the league.
When you think about the facilities & support that is provided at BFC, I think it is a very cheap sport, so it is imperative that every player endeavours to make payment as quickly as possible to ensure that we have the available funds to continue to provide the things that are sometimes take for granted.
If you wish to discuss, I can be contacted via e-mail, mobile number (0421-768534) or work number (03-96756985).
Cheers
Chris “Shooter” Sharp
Treasurer 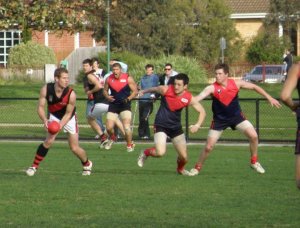 Congratulations to Luke Morrison who plays his 150th BentleighFC game on Saturday.

Had the team dropped the first final last year, Luke would have played shared his milestone with a premiership, however playing his 150th in the clubs return to division 1 will be a memorable experience.

As part of the senior leadership group, Luke has been an outstanding contributor on and off the field. Luke has kicked 67 goals for Bentleigh.

As a product of the Bentleigh Junior Football Club, Luke has been an integral part of our recent success.

Bentleigh F.C. After Match Drinks - Round 1

All players, netballers, partners, staff, sponsors and spectators are invited back to the Bentleigh RSL after this weeks matches.

The RSL continue to provide strong support for our club so please make an effort to drop in for a drink or meal.

In what seems a lifetime since the Club’s grand final victory in Division 2 last season, the Club finally gets what it had planned for since rejoining the SFL – that is, to play in Division 1.

A tremendous amount of hard work has been done, both on and off the field, to prepare the Club for its Round 1 matches against St. Kilda City and Carrum Patterson Lakes in the Under 19’s.

Working in tandem with the football side of things a great deal of hard work has also taken place to give the Club three netball teams in 2014.

Although the football club has bid farewell to some Club stalwarts, we are confident that the recruitment of some key, experienced footballers alongside the youth emerging from the reserves and under 19’s, will see Bentleigh perform well in Division 1.

Our youth development group has done a fantastic job in recruiting a significant number of players to, once again, see the Club being able to field a more than competitive Under 19’s side.

In 2014 our onfield football department has a decidedly local look about it with, apart from senior coach Brad Canavan, the rest of our coaching staff being appointed from within the Club’s senior and junior ranks. The Club’s aim of growth from within, for its playing and coaching list, has materialized.

Accolades are often given to players and coaching staff at football clubs, however, our Club would like to congratulate its administrators and officials on the Bentleigh Football Club being awarded the Best Conducted Club in Div 2 as well as the Best Conducted Club, overall, in 2013. A job well done to our hardworking volunteers.

All Club members and supporters are advised to regularly check the Club’s website / facebook sites and Club app for updates regarding Club events.

A huge “Thank You” to Zibba and Kim for what they are doing in the communication area. 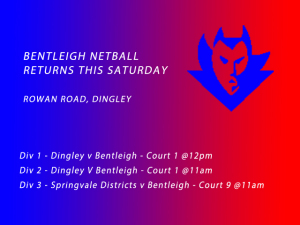 The Bentleigh netballers kick off their season this weekend with the three sides taking part in their first of three grading matches.

Both our division 1 and 2 girls will take on reigning premiers Dingley in a tough first up match, while our new third side will play Springvale Distrcits.

This is the first time we have fielded three sides and the growth of the competition is extremely exciting.

A fixture will be set from round 4 onwards with the full fixture becoming available at www.bentleighfc.com shortly after that.

Thank you to Kobey Weir for her great work in preperation for the season and we wish the girls the best of luck!