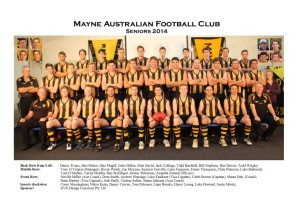 To adequately celebrate an event such as the 90th Birthday of the Mayne Tigers there were a number of special activities that took place. It was also an underlying feature of all that the Tigers did in 2014.

At our Jersey Presentation night it was evident that the season was looking good – and the launching of the team into the year was accompanied by the launching of a 90th Birthday branded batch of Club polo shirts. These were sold out by the time the Reunion Day in May was complete. The club polo’s were a limited batch supplied by Luke Faulkner.

The Reunion Day and Mick Nolan Medal game was on Saturday 24th May. The game was a resounding success with the Tigers blowing away Caboolture for the second time in the season. The big crowd of Mayne past player’s and supporters thoroughly enjoyed the match. And fittingly the Mick Nolan Medal was won by Luke Faulkner with a superlative display at full-forward. He had a super season – breaking the goal kicking record at Mayne with 136 for the year, Leading Goal Kicker for QFA North and also the Duncanson Medal B&F for QFA North, he won the Mick Nolan Medal for B&F in the Grand Final and was the Players Player at Mayne – the Mick Nolan Trophy – a trifecta of Mick Nolan awards.

The day was also distinguished by the introduction to the crowd of the oldest living Mayne player – Dick Drake. Dick told the audience about the “good old days!” at Perry Park and the premiership he was part of in 1952. Noel Best had a group of his 1958 premiership team at the game and we were privileged to talk to them, as well as Keith Watson, another Mayne great from the mid 50s.

At the Reunion the Roll of Honour was shown for the first time – this is a DVD that captures the playing histories of 135 of the best players to grace the Mayne Tigers jersey. It went on display via the big screen and was well received by the crowd – albeit with some editing errors that need to be corrected. There may also be one or two additions after the glorious season that we have just experienced, apart from the updating with this year’s Best and Fairest – Shaun Daly.

Our Footy Club’s successes on and off the field in 2014 were guided by outcomes from a Strategic Planning session held in late 2013. This was based on the AFLQ’s Six Pillars (Administration & Governance, Strategic Plan, Grounds & Facilities, Brand & Culture, Finance, and Performance) as well as the Review of the Football Club’s operations (compiled by the firm Johnson, McColm and Kingston). Plans were laid down for each strategic area the Club needed to address.

The Football Department (Performance) met their targets fully. The result was the best year on the field for over 75 years.  Player performance and culture could not have been better – all three teams made the finals, there were two Premierships and a season where the players obviously enjoyed each other’s company. The supporters were also catered for with after the game drinks and awards as a standard feature once more. Finals football returned to Mayne with the 1st Semifinal played at home against Noosa. Mayne were eventually successful after being pushed all the way by Noosa for three- quarters of the game. Mayne Tigers once more pulling away from their Tiger opponents in the final term.

The day was a great success off the field with the large crowd enjoying the finals atmosphere to the full. The turnout at the Grand Final of Mayne supporters was extremely good and it shows that the tradition of the Club is still strong – Brand & Culture encompasses Club Tradition. The crowd at the semi-final included Premier Campbell Newman as one of the Club’s guests. He also was supporting the Mayne Tigers in the Grand Final at Burpengary.

The Black and Gold Ball – a traditional celebration mid-season was a big success – with the gorgeous girls and dresses and some pretty smart young and old men.

At Trophy Night, one of the initiatives of the 90th Birthday year came to fruition – the Team of the Decade (2001 -2103) was announced.30 players were named and specially struck medallions were presented to the 12 that were there on the night. This team was selected to celebrate the 90th Birthday – only highlighting 12 of the 90 years so as not to detract from the Team of the Century. The plans for the 90th Birthday celebration (Brand & Culture) were generally fulfilled and enjoyed by all.

On the ground there has been some improvement also – the new coaching box (Funded by the Past Players and Supporters Group) is very striking evidence of this. However, some other projects were stymied for lack of grant money coming through. To do the second box we may need to have some donations in kind – steel and timber.

Financially it has also been a good year – the combination of a winning team and the community based football in QFA North has shown an increase in both bar sales and canteen sales – leading to better returns. This contributed to the club being in the black for the financial year.

It was great to see past players and supporters at games throughout the year, as well as a big turnout at the Mick Nolan Medal Reunion day in late May. The final get together – a Beer and a Yarn at the Windsor Park (Keith Beavis Oval) beer garden was a very good day and we plan to make this an annual event and hoping more people can attend next year.

There are still things to achieve and consistent back to back seasons would be one on the list – however, we will look back at 2014 as one of the great years in the history of Mayne Tigers AFC.