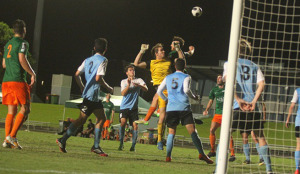 Sharks took a two goal lead inside ten minutes courtesy of Jack Boxell and Justyn McKay before Heat stormed back late in the contest to level terms courtesy of Alex Smith and Jamie Gosling.

However, Mirkovic responded with his second league goal of 2015 just minutes from full-time to keep Sharks a mathematical chance of a second straight Finals Series appearance.

The Gold Coast club’s top four hopes are dependent on Western Pride at least a point against Olympic FC on Sunday.

Sharks started the contest sharply and opened accounts after just six minutes when Rees Duncan’s shot rebounded off the post into the path of Boxell, enabling him to turn in his first league goal of 2015.

The visitors doubled the advantage only two minutes later when Heat goalkeeper Nicholas Mooney spilled a strike from Boxell into the path of Sharks skipper McKay.

Sharks spurned a chance of a third goal inside fifteen minutes from the penalty spot - however Mooney made amends for his earlier error by keeping out Roman Hofmann’s strike.

Sharks continued to see the better chances as McKay struck the crossbar from distance before Hofmann forced a dramatic triple save from Mooney after pouncing on an errant back-pass.

Heat wrested the initiative late in the half but were unable to reduce the deficit before the break - Tamas Maffey-Stumpe heading over the crossbar before Joshua Pin was denied one-on-one by Sharks goalkeeper Shane Viitakangas.

Heat continued their resurgence after the restart as Smith forced a full-stretched save from Viitakangas before Gosling also called upon the Sharks gloveman.

Promising attacking raids fell short in lieu of the final pass for the hosts, while Sharks' previously free-flowing attack stuttered in reply.

Smith delivered the breakthrough for Heat with a quarter hour remaining - volleying home strongly from David Di Lucchio’s cross for his 12th goal of the campaign.

With ten minutes remaining a free-kick from Smith caught an arm in the Sharks wall to offer the hosts a chance to level terms from the penalty spot - Gosling converting with the ensuing spot-kick.

However, Sharks regained the impetus in the closing stages as Hofmann shot just over from a free-kick and McKay called upon Mooney with a long-range effort.

Speaking post-match, Heat Technical Director Chris Collins said his team’s defensive return was below par in their final match of the season.

“I always thought we could score goals but really through the midfield and defensive errors cost us tonight,” Collins said.