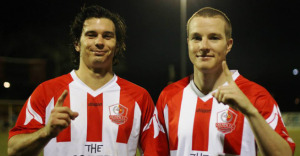 Three of NPL Queensland's former Brisbane Roar players are set to return to the national limelight next Tuesday in the Westfield FFA Cup Round of 32.

Olympic FC’s Matt Mundy and Tim Smits as well as Jonti Richter from Brisbane Strikers will feature on the opening night of fixtures in the national knockout competition modelled on England’s historic FA Cup.

Olympic will host former National Soccer League Champions Melbourne Knights at Goodwin Park, while Strikers will travel to Newcastle to play Broadmeadow Magic in a match that will be televised live by Fox Sports.

The three ex-Roar players made a combined total of 61 appearances for the club in the first seven seasons of the Hyundai A-League.

“It’s always good when there’s a lot of people packed into a small area. It gets everyone amped up and I’m sure the players will give that little bit more especially if all the Olympic fans turn up for this game,” he said.

Mundy added that television coverage via broadcast partner Fox Sports could prove a boon for some of the younger players in the Olympic squad seeking to take their career to the next level.

“It will be a good experience for a lot of the younger boys and they will get some of that exposure they’ve been looking for so that will be good for them.”

Olympic forward Smits played 14 games in two seasons with Roar and said he was conscious his club were representing the Sunshine State against their higher-profile Victorian opponents.

“They’re meant to be the better NPL league, I suppose, so I guess they will be a little bit tougher than what we’re used to,” Smits said.

“But we want to do the state proud against the other leagues,” he added.

Smits also conceded he was looking forward to the challenge of a potential match-up against A-League opposition should his side overcome Knights.

“I know I haven’t played at that level for a while, but it would be good to see how we match up against an A-League team,” he said.

Strikers winger Richter, who scored his only Hyundai A-League goal in Roar’s foundation season before moving to the now defunct New Zealand Knights, told theffacup.com.au earlier this week he was hoping victory for his club would also set-up a tie against A-League opposition.

“The boys are talking about it a fair bit. We believe we have a chance to beat Broadmeadow and then you could pull an A-League club,” he said.

Richter added that he dreamed of seeing Strikers return to the scene of their 1997 NSL Grand Final triumph in a blockbuster all-Queensland Cup Final.

“It sounds crazy but imagine the Brisbane Strikers getting to play at Suncorp Stadium again against the Brisbane Roar where both clubs have won national championships,” Richter suggested.

“It would be an amazing experience for everyone involved. I’m sure we’d get a packed house whether we win or lose.”