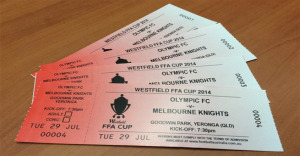 Ticketing details for the Westfield FFA Cup Round of 32 match between Olympic FC and Melbourne Knights FC on Tuesday, 29 July have been released.

Reigning NPL Queensland champions Olympic host the famous Victorian club at Goodwin Park on the opening match day of the nationwide knockout competition with kick off scheduled for 7.30pm.

Tickets for this special occasion can be pre-purchased at Olympic FC or at the gate on matchday.

To get in early, visit Olympic FC's office in the clubhouse at Goodwin Park or call 0402 619 239 within the hours listed below to have your allocation set aside.

For more information about the Westfield FFA Cup visit the official website - www.theffacup.com.au

Ticket details for interstate matches involving Queensland clubs will be publicised as they come to hand.