ITS FINAL TIME IN SYDNEY 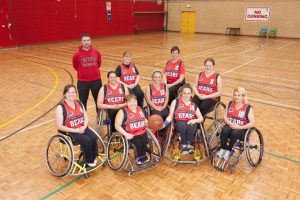 World famous players are coming from all over Australia to compete at the WNWBL Finals. The Victoria Dandenong Rangers are in the lead position in the ladder and will be playing off against the Be Active Western Stars from Perth. Two Sydney teams will also be competing head to head in the Finals; the Stacks Goudkamp Bears and the Sydney University Flames. So be sure to come along and support your local teams.

“The 2011 WNWBL Championship title is hotly contested and with such fierce competition it will be a spectacular finish to a stellar season.” Said Gillian Ting, Executive Officer of Wheelchair Sports Australia.

“Also, for the first time, the 2011 WNWBL Finals will be filmed and televised on Aurora Community Channel. Having televised coverage will show the excitement and speed of a brilliant spectator sport. It is definitely thrilling to watch, as wheelchair basketball is not only faster than able-bodied, the wheelchair is considered part of the body and can be used to block a player. This really demonstrates the player’s skill and manoeuvrability.”

“We’re excited for the finals to be filmed. Having televised coverage is important for any of our nation’s league competitions and this will help build the future of an already popular disability sport.”

The 2011 WNWBL Finals will be filmed and televised on Aurora Community Channel. The programme will be 90 minutes, airing during October and November, and will include additional coverage in December for International Day of People With Disability. The programme will contain highlights from the Bronze playoffs and play by play action from the WNWBL Grand Final game.

The broadcast is made possible by the following organisations; Basketball Australia, Australian Athletes With a Disability, Aurora Community Channel and Gondwana Productions.

Stay tuned to watch the winning teams battle it out for the title of 2011 WNWBL Champions.

The full broadcast and game schedules are below:

International Day of People With Disability