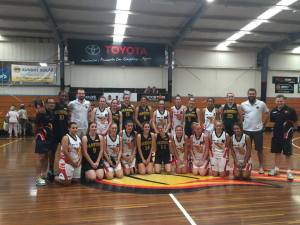 Over the weekend, the Warriors Premier League women's team travelled to Mildura to play 2 trail games as a final hit out in preparation for Norwood in round 1. Playing at The Hothouse, both the temperature and the action lived upto the venues name.

Game 1 started as a defensive struggle with the quarter time score 17-11. From there, the game opened up with both teams filling up the score sheet in a fast paced, entertaining style of play. The game remained close the entire way through with the Warriors holding the lead until the end winning 85-78. Mildura captain, Vanessa Power leading all scorers with 37 points and showing what a great scorer she is, making some incredible buckets under high defensive pressure. For the Warriors, Import Tavarsha Scott finished with a double-double, showing what she will bring to the Warriors this season in a great all round team effort, with all players making a contribution to the win.

Game 2 started at midday, with the temperature at 36 before the tip. Mildura came out of the blocks firing with a 25 - 15 at the end of the first. The Warriors then turned up the pressure on the younger heat team holding them to an 8 point term going into the half 37-33. From there the Warriors took control using their height and experience to advantage to extend the lead to almost 20 at one point. To the Heats credit, they continued fighting, forcing the Warriors into a few mistakes, but it wasn't enough. The Warriors taking the win 78-66. Tavarsha Scott again providing a double-double, Rachael Griffins grabbing 8 rebounds and new recruit Aimee Herriman dishing out 5 assists. A great sign for the Warriors, Katherine Perkas was back in action after her injury last year. As usual, giving the Warriors a great scoring option while grabbing boards and playing tough defence.

The team and coaches would like to thank the Mildura Basketball Association and its supporters for there hospitality over the weekend. Both games had a great crowd for trails games which provided amazing atmosphere for the games. We Would also like to wish the Lady Heat the best of luck for their upcoming Big V season in which they hope to make it back to playoff action. Hopefully you guys can go 1 step further this year with a young, talented and exciting team which can only get better with the arrival of you import in the coming weeks! The Warriors really appreciate the hit out and hopefully we can do it again next year!

As for you Warrior fans, it all starts THIS FRIDAY (11/3) at Mars vs the reigning champs Norwood! We need as many of you as possible at the game to support both the Women (6.30 pm tipoff) and the Men (8.15 pm tipoff) to help us get over the line. Hope to see you at the game in GREEN! #Warriorpride #BleedGREEN #ThankyouMildura