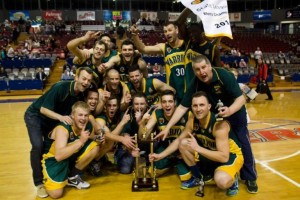 West got off to a fast start and appeared that we were in trouble. With some defensive and offensive changes the Warriors fought their way back into the game. Luke Stanbridge assisted with an immediate impact off the bench. Then Alex Starling showed us why he was the Woollacott medallist, playing an outstanding game. Throughout the game the two teams would trade baskets and then West would gain a small lead and Woodville would work hard and come back.

Late in the 4th quarter West went on a run, and their fans were talking about post match celebrations.  However, this hard working Warriors team weren’t listening, they had their own agenda. 8 points down with 2 minutes to go a Warrior timeout and Steve Pilkington stirred the men up in the huddle. They came out of the timeout and were electrifying, and clawed their way back into the game, shutting down West’s offence, creating steals, running the break, and hitting big shots including a Jared Graves clutch 3 pointer. The Warriors crowd were ecstatic, cheering and chanting loudly, banging on signage. It was so loud you could no longer hear the beat of West Adelaide’s drum kit.

With the scores tied at 78 coming into the last 30 seconds a game saving charge from the Captain Cameron Wilson gave Woodville a chance to win the game. A timeout was called; the West fans were in dismay, the Warriors fans continued to make NOISE! Everyone was thinking, who is going to take the last shot? Will it drop? Will there be overtime?

The ball was advanced and West Adelaide were found chasing Dom White running off a pick, who had already hit a big shot coming down the stretch, but then Darren Ng went in the opposite direction running off a pick and everyone was now thinking Darren would be hitting an outside jumper for the final shot, however he made a quick back cut to the basket and made an easy 2, with a poised Cameron Wilson making the assist. It was genius, and the play was run to perfection! The West team and fans were in disarray, and the Warriors were celebrating. LOUDLY! However in the words of Larry Bird “I didn’t mean to leave 2 seconds on the clock”.

With a timeout and 2 seconds to go West advanced the ball but the Warriors defence was amazing which left West with a low percentage miracle heave from a metre out past the 3 point line for the win. It missed and the celebrations begun, players, coaches, managers hitting the floor, jumping for joy. The crowd slapping hi-5’s, and cheering with excitement. What a night, what a game, what a great effort from all the team, and the Warrior community. Well done and congratulations to the Warriors CABL Men’s Team!

Premiership T-shirts will be available for purchase for the Warrior Community: Watch this space!