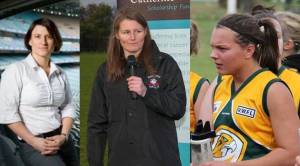 In an exclusive for the Premier Division competition this weekend, the live video stream of the Grand Final between Darebin and Diamond Creek will feature an experienced all female commentary team.

Jo Wotton, Anna Harrington and Chyloe Kurdas will be relaying all the action to those not fortunate enough to witness the Premier Grand Final live at Piranha Park, Coburg, with the stream beamed around Australia and the world.

AFL Victoria CEO Steven Reaper said it is only fitting that the best game of the season features a call team with vast experience from within the competition.

“It is a real highlight for the VWFL to be able to have our premier game feature such an experienced call team,” Reaper said.

“These three women have an intimate knowledge of the competition and its players, and their passion for sport will be obvious in the broadcast on VWFL.com.au.”

All three women have a long association with the VWFL.

Wotton has been involved with the Eastern Devils on and off since 2000 in a variety of positions including player, committee member, assistant coach and now president.

Harrington was a premiership player with Wyndhamvale and was also involved with Port Colts.

Kurdas played over 150 games in the competition, enjoying premiership success with Melbourne Uni as captain.

Their association with the competition is only strengthened by their media involvement at various levels.

Wotton has been a regular caller for VWFL games over the year, as well as over eight years’ experience with the VAFA as a caller.

Harrington just this week became the first woman to be the main caller for a World Cup qualifier for SBS Radio and has called football at VWFL and local level.

Kurdas has been involved on air with the AFL Women’s Exhibition games, most recently on Channel 7.

Tune in from 2:20pm Sunday for a live call of the Premier Division Grand Final on VWFL.com.au

The website will also feature a live call of the Division 1 Grand Final between Cranbourne and Knox, with AFL Victoria Communications Manager Anthony Stanguts, VFL caller Neil Butler and Chyloe Kurdas part of the call team from midday.