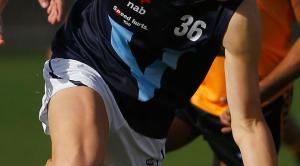 Vic Metro has led all match to record a four point win over Western Australia in the opening round of the NAB AFL U16 Championship.

A seven goal to three second term set up the win, with five goals in the first half to Pat Kerr helping Metro to a commanding 35-point lead at half time.

Despite WA dominating the second half kicking 8.9 to 4.2, Metro was able to hold on for a four point win.

The next game for Vic Metro is on Tuesday versus SA, who defeated Vic Country in Round 1.