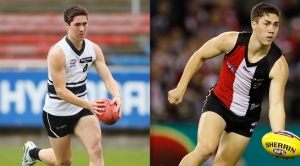 Gresham, 18, had 16 disposals at 87 per cent efficiency, eight inside-50s, two goal assists and kicked one of the goals of the year – baulking Cats defender Tom Lonergan and snapping truly from a pocket – to bring the Saints within three points of the lead late in the match.

The South Morang junior was selected with pick no.18 in last year’s NAB AFL Draft and has played 10 games in 2016, kicking seven goals and averaging 12 disposals and three tackles per game. 177cm Gresham’s form is currently keeping fellow small forwards such as Jack Lonie, Jack Sinclair and Eli Templeton out of St Kilda’s senior team.

Gresham rocketed up the draft order following a stellar 2015 season for the Knights. He averaged 29 disposals per game across 13 matches – ranking second in the TAC Cup for total kicks during the home-and-away season – and booted 15 goals. His performances saw him claim Northern’s best and fairest, the TAC Cup Coaches Award and TAC Cup Team of the Year honours, while he also finished second in the Morrish Medal count.

Gresham represented Vic Metro at the 2015 NAB AFL U18 Championships, earning the team’s MVP award and selection in the forward pocket of the U18 All Australian team.

“Gresham’s continued effort and willingness to learn in his first year at the club has been really impressive,” Richardson said.

“His performance on Saturday night demonstrated the type of composed and aggressive player that he is, with his goal in the last moments of the fourth quarter being just one obvious example of his composure.”