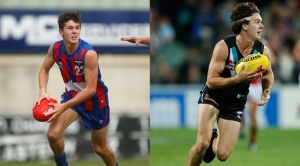 Former Oakleigh Chargers small defender Darcy Byrne-Jones has been named the Round 10 nominee for the NAB AFL Rising Star award.

Byrne-Jones, 20, impressed with 23 disposals at 78 per cent efficiency, eight marks and a goal in Port Adelaide’s 45-point defeat of Melbourne, limited dangerous Demons small forward Jeff Garlett to nine disposals and a goal.

He made his AFL debut in Round 3 and has played all eight games since, averaging almost 18 disposals per game and regularly showing toughness in spite of his 181cm/75kg frame.

The Camberwell junior and 2013 Vic Metro representative was selected by Port Adelaide with pick no.52 in the 2013 NAB AFL Draft and had to bide his time before breaking into the Power’s senior side.

Port Adelaide coach Ken Hinkley said Byrne-Jones was reaping the rewards of having a team-first focus.

“Darcy has been really solid for us over the past eight games,” Hinkley said.

“But you can only reach that sort of form when you’ve been consistent for weeks and I’ve said before that Darce had a really strong pre-season.

“He’s had eight really good games and deserves to be recognised for last week’s performance. He just does the team thing every week and from that perspective he's been really good for us.”

Byrne-Jones is the eighth TAC Cup graduate to earn a Rising Star nomination in the first 10 rounds of the AFL season.