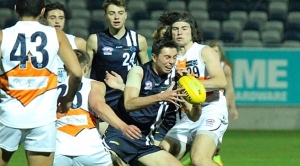 The Geelong Falcons have flown higher than anyone else over the last five weeks, going undefeated to sit just behind the Dandenong Stingrays on percentage in second on the ladder.

Since being humbled by the Murray Bushrangers to the tune of 69 points in Round 2, the Falcons have accounted for the Gippsland Power, Northern Knights, Eastern Ranges, Western Jets and Calder Cannons by an average winning margin of 61 points.

Geelong has averaged 122 points per game in that time to become easily the highest-scoring team in the TAC Cup.

But what stats are behind that potency in front of goal?

Well, successful football often starts in the contests and the Falcons are winning the ball in congestion with impressive regularity. Over those last five games, they average 27 more contested possessions and six more clearances per game than their opposition.

This has led to a dominant +22 inside-50s per game differential and plenty of scoring opportunities for goalkickers Brett Blair (26 goals in 2015), Jackson McLachlan (13), Pat Dowling (12) and Jack Henry (12).

And they can thank the grunt work of teammates upfield such as Max Augerinos (27 disposals per game), Lockey McCartney (24) and James Worpel (21) for that.

Deny the Falcons the ball when you do win it back from them and you might stand a chance of stopping the flow of goals.

In other key stats from Round 7:

30: Jordan Gallucci’s damaging boot was a major factor in the Eastern Ranges’ 50-point win against the Gippsland Power two weeks ago. The skilful AFL Academy member disposed of the ball 30 times by foot – nine more times than any other TAC Cup player in Round 7. That same boot drove the ball inside 50 on 12 occasions for the Ranges, as well as bagging three goals.