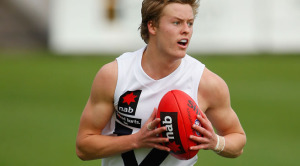 Vic Country has fallen 22 points short of an inaccurate South Australia in Round 2 of the NAB AFL U18 Championships in Adelaide.

Despite a dominant first quarter and at one stage leading by 28 points early in the second, Vic Country were unable to halt a resurgent South Australia storming to a 9.21 (75) to 8.5 (53) victory.

The final margin of 22 points could have been much more had SA made more of their opportunities.

The hosts had at one stage had 16 scoring shots in a row but were unable to put Vic Country away with their poor conversion rate.

Rhys Mathieson (Geelong Falcons) was the standout for Vic Country, gathering 32 disposals that included five inside 50s and eight clearances.

Evans’ 16 contested possessions was also a match high and illustrated his fighting qualities.

Dandenong Stingrays utility Tom Lamb picked up 20 touches and was one of eight individual goalkickers who all finished with one each in the absence of key forward Patrick McCartin.

Division One - Round Three matches next  weekend: