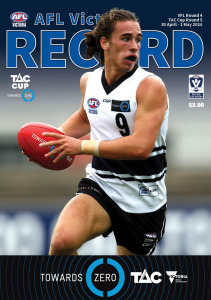 The AFL Victoria Record this week features Gippsland Power captain Ben Ainsworth, who is aiming to develop aspects of his game people haven’t yet seen following his stellar 2015 season as a 17-year-old.

We also chat to Jordan Russell about his dual role as Footscray captain and Western Bulldogs development coach, in which he’s passing on his broad range of football experiences to the young guns of one of the AFL’s hottest clubs.

VFL News looks at how Frankston snapped a run of 24 consecutive losses with a memorable triumph over Richmond in Round 3, while in TAC Cup News we look at how Queensland and the NSW/ACT Rams have fared as they bow out of the competition for 2016.

The Record also reviews Round 3 of the VFL Women’s season and has the Vic Country and Vic Metro squads for the upcoming AFL Youth Girls National Championships in AFL Vic News.

Finally, as always, don’t forget to test your knowledge of all things VFL, TAC Cup and VFL Women’s in the weekly AFL Victoria Record quiz.