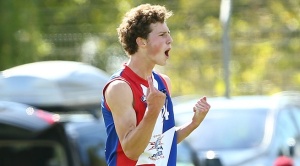 Aidan Quigley (10 games, ave. 12 disposals in 2016): “Aidan’s probably been more of a small/medium-sized forward previously but we’ll see him push into the midfield this year. He’s got a very good sidestep and he’s good overhead. He’s in the AFL Academy.”

Changkuoth Jiath (10 games, ave. 11 disposals and four tackles in 2016): “CJ’s very skilful with a great kick on the left and right foot, and he has elite endurance. He can play anywhere on the ground so he’s very versatile. He’s of Ethiopian background and fits into the Next Generation Academy with Hawthorn. He’s also in the AFL Academy.”

Austin Hodge (15 games, 17 goals, ave. 10 disposals and four tackles in 2016): “Austin’s about 190/191cm and he could play forward and midfield. He has nice clean hands and he’s got a bit of X-factor about him. He played about three quarters of last year but was a bit hindered by a hip injury, so he’s had some surgery and he’s building back into his training now.”

Nick Hogan (13 games, ave. 13 disposals in 2016): “Nick’s probably more of a genuine midfielder. He’s about 180cm but he’s got big, strong, powerful leg speed and breaks away from contests. He’s a real ball-winner. He missed some games in the middle of last year through injury so that certainly put a big hole in his season.”

Will Leslie (15 games, ave. 17 disposals and four tackles in 2016): “Will’s about 193/194cm and can play in the midfield, back line or forward line, so we think he’s very versatile. He’s got lightning speed and is a very good kick. He had an interrupted pre-season last year and didn’t play any practice games, but he’s had a good pre-season up to this point. He’ll be used mainly through the midfield this year – he had a taste in there last year which was probably the first time he’s played in the midfield, so he’s learnt a lot and we expect him to really improve.”

Sean Masterson (pictured - 18 games, ave. 10 disposals and three marks in 2016): “Sean can play as a key forward and key defender. Last year was his first in the program so it was a really steep learning curve for him. He started last year as a forward and finished the season as a back, and he’ll probably start up forward again this year.”

Julian Patterson (five games, ave. five disposals and 13 hitouts in 2016): “It was Julian’s first year in the program last year. He’s got a great vertical jump and is athletically very gifted for a guy of 203cm. He’s the brother of Eleanor who represented Australia at the Rio Olympics in the high jump. He was involved in basketball and athletics as a junior.”

Will Leslie: Over-age brother of Jack (six AFL games for Gold Coast). “Jack’s more of a key-position player than Will is and he was probably a fair bit taller at this age.” See above for more.

“We had a good group of bottom-agers last year who all came through together and we hope they can lead the way this year. We’ve also got some good bottom-agers who we think will get some really good experience and a lot of game time this year as well, so we’ll hope to improve on what we did last year. The boys will take a lot of confidence out of finishing last year well (four wins in the last five games) and we’ve seen in previous years that can hold the next season’s group in really good stead.”