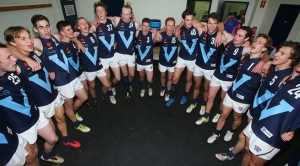 Vic Metro staged a huge last-term comeback to snatch victory over South Australia at AAMI Stadium in the NAB AFL U18 Championships on Sunday.

Metro – proudly supported by Dairy Australia – trailed by 35 points at three-quarter time, but booted six unanswered goals in the final stanza to pip the Croweaters by three points on their home turf.

The heroes in front of goal were Oakleigh Chargers forward Pat Kerr – who kicked four goals in the first 10 minutes of the fourth quarter – and Sandringham Dragons midfielder Oliver Florent, who followed up with two late majors of his own.

Sandringham’s Andrew McGrath backed up his superb performance in Metro’s thrilling two-point triumph over Vic Country last week with a team-high 27 disposals, as well as six marks and six rebound-50s.

Alongside Florent’s cameo, some of McGrath’s other Dragons teammates played big roles in the win, with Jack Scrimshaw racking up 22 disposals and six rebound-50s, while Tim Taranto had 20 disposals, six marks and five inside-50s.

Metro peppered the big sticks without reward in the first quarter, only managing five behinds as the Croweaters kicked two goals in the opening nine minutes to set up an eight-point advantage at the first break.

Clarke and Venables kicked majors in the second term, but SA put four of its own on the board to lead by 18 points at half time. It then extended that advantage to 35 by the last change despite Metro having the same amount of scoring shots. Pat Kerr had been the biggest contributor to that inaccuracy with four behinds, while Taranto and Ranges midfielder Jordan Gallucci missed three each.

Whatever Vic Metro coach David Flood said in the team huddle prior to the last quarter clearly worked a treat though, as his troops – and Kerr in particular – came out breathing fire.

Their late goal burst means Metro remains undefeated ahead of its third match of the Championships this Friday against the Allies at Etihad Stadium from 2.35pm. Vic Country will play its third game of the carnival against South Australia earlier on Friday from 12.35pm, also at Etihad Stadium.