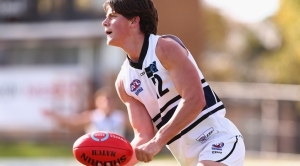 A week after having their run-and-gun game style shut down in a loss to the Gippsland Power, the Northern Knights re-discovered their attacking mojo against the Western Jets in Round 9.

Against the Power, the Knights dominated the disposal count by moving the ball forward quickly by hand, recording more handballs than kicks and very high handball-receive numbers. However, their inability to convert on the scoreboard once inside 50 hurt them in the 28-point loss.

Things clicked in their 33-point win against the Jets at Burbank Oval though, despite Melbourne’s wet weather potentially standing in the way of effective quick ball movement.

The Knights stayed true to their style, backing themselves to first win the ball back from the Jets and then fire it forward at speed, with Bobby Lamanna (11 handball receives) and Patrick Lipinski (10) the chief runners.

In other key stats from Round 9:

37: 169cm Will Stephenson had a monster game in Gippsland Power’s 37-point loss to the North Ballarat Rebels, recording 37 disposals – eight more than any other player on the ground. The 17-year-old also had clear game-highs in kicks (31), contested possessions (20) and tackles (17), as well as an equal-game-high nine inside-50s.