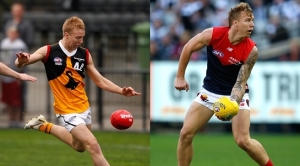 Harmes, 20, has played all seven matches for the Demons in 2016 and is averaging 15 disposals, four tackles and one goal per game. He has now played 15 AFL matches after playing eight in 2015 while still on the club’s rookie list.

The Devon Meadows junior was selected with pick no.2 in the 2013 Rookie Draft and was elevated to Melbourne’s senior list at the end of last season having broken into the senior team in Round 15 following a year and a half spent injured or playing in the VFL.

Harmes said he was challenged by Demons coach Paul Roos to increase his professionalism during his first year at the club, and has since responded.

“When I got to the club I was still living as an ordinary 18-year-old kid,” Harmes told the AFL website. “I didn't really understand how professional I had to be as an AFL footballer.

“It really hit home I needed to lift my professionalism by doing the extras and working harder. It was really good to have that pressure on me because it's turned me into a better footballer and now I'm reaping the rewards of hard work.”

Roos praised Harmes for the changed approach to his football.

“James has been working really hard to develop his craft and this nomination is good reward for his effort,” Roos said.

“We know that when he plays with intensity, like he did on the weekend, he is a very valuable member of our team.”

Harmes’ nomination is the fifth for TAC Cup graduates out of seven so far in 2016, following those of Melbourne teammate Clayton Oliver (ex-Murray Bushrangers, Round 1), Essendon’s Darcy Parish (Geelong Falcons, Round 2), Carlton’s Jacob Weitering (Dandenong Stingrays, Round 3) and Sydney’s Tom Papley (Gippsland Power, Round 5).