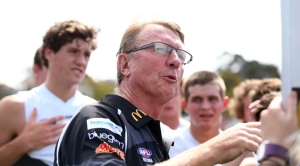 The North Ballarat Rebels are one of the form teams of the TAC Cup after recording their third consecutive victory in Round 6 following three straight losses to start the season.

Their early draw didn’t do new head coach Gerard FitzGerald (pictured) any favours, with his troops having to face current top-four teams the Geelong Falcons, Dandenong Stingrays and Murray Bushrangers in the first three rounds respectively.

North Ballarat’s subsequent games haven’t been much easier though, with wins coming against the Calder Cannons, Bendigo Pioneers and Oakleigh Chargers – all teams with good performances on the board in 2016.

Regardless of the opposition, it’s the improvement in key statistical measures from Rounds 1-3 to Rounds 4-6 that will please FitzGerald the most – an indication the Rebels are warming to his game plan.

North Ballarat has been harder at the contest, winning the ball more and using it to generate a heap of scoring opportunities inside 50 – a recipe for success that will stack up against any team in the competition.

In other key stats last weekend: