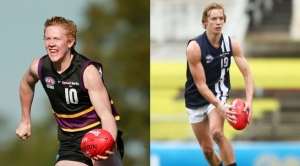 Former Geelong Falcons midfielder Darcy Parish was named the Round 2 NAB AFL Rising Star nominee for an outstanding performance in Essendon’s 13-point victory over Melbourne at the MCG on Saturday.

It follows the Rising Star nomination for another 2015 TAC Cup graduate, Melbourne’s Clayton Oliver, in Round 1.

Parish, 18, had 21 disposals at 86 per cent efficiency, eight tackles, five inside-50s and kicked a memorable running goal late in the final quarter to seal the win for the Bombers in just his second AFL match.

He was also one of Essendon’s best players in Round 1, tallying 25 disposals, 12 contested possessions, six clearances and six tackles in the club’s 61-point loss to Gold Coast at Metricon Stadium.

The Winchelsea junior was selected with pick no.5 in the 2015 AFL Draft after two stellar seasons with the Falcons. He was named a dual All Australian after representing Vic Country at the 2014 and 2015 NAB AFL U18 Championships and also made the TAC Cup Team of the Year in both seasons.

181cm Parish is known for his ability to both win the ball in contested situations and burst away from congestion. Essendon coach John Worsfold said Parish’s start to his AFL career had been “extremely pleasing”.

“He’s been really strong in the contested area of his game,” Worsfold said. “He shows a lot of composure under pressure and we are really excited at the club about the bright future ahead for such a talented young player.”

Parish said he was grateful for the trust shown in him by senior teammate David Zaharakis, who handballed to him to set up the match-sealing goal.

“He (Zaharakis) probably could've kicked it himself, but it was nice of him to give the handball back inside and it was great to finish that one off,” Parish said.

“It was an unbelievable feeling and one I'll remember for the rest of my life.”

Ex-Murray Bushrangers midfielder Clayton Oliver, taken by Melbourne one selection ahead of Parish at pick no.4 in the 2015 AFL Draft, claimed the Round 1 Rising Star nomination.

The big-bodied Mooroopna junior made a remarkable debut for the Demons in their two-point win against GWS at the MCG, recording 22 disposals, 15 contested possessions and seven clearances in just 58 per cent game time.

Oliver stormed home in the second half of the 2015 TAC Cup season to claim the Morrish Medal and rocket into contention as a top-10 draft pick. He also won Murray’s best and fairest award last year and was named in the TAC Cup Team of the Year.