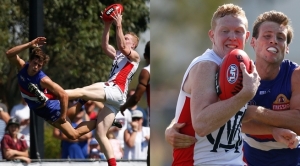 Clayton Oliver (pick no.4, AFL Draft - pictured) has put himself firmly in the frame for selection in Melbourne’s Round 1 team with a second bullocking pre-season performance in the Demons’ 12-point win against the Western Bulldogs in Craigieburn on Saturday.

The former Murray Bushrangers midfielder – last year’s Morrish Medal winner who rapidly emerged from obscurity in the second half of 2015 – had 17 disposals at 77 per cent efficiency, nine contested possessions and three clearances in 71 per cent game time.

On the other side of the field, Kieran Collins (pick no.26, AFL Draft) played his second NAB Challenge match for the Western Bulldogs, the ex-Dandenong Stingrays key defender recording eight disposals, five one-percenters and four tackles in 69 per cent game time. Former Western Jets ruckman Luke Goetz (pick no.29, Rookie Draft) also played 14 per cent game time for the Bulldogs.

2015 Oakleigh Chargers premiership player Tom Phillips (pick no.58, AFL Draft) played his first game in Collingwood’s eight-point victory over North Melbourne in Wagga Wagga on Saturday. The classy utility had 11 disposals in 69 per cent game time, while new teammate and ex-Northern Knights big-bodied midfielder Brayden Sier (pick no.32, AFL Draft) also made his debut for the Magpies, finding the ball twice in 24 per cent game time.

Former Eastern Ranges running midfielder Ryan Clarke (pick no.31, AFL Draft) played his second game for the Kangaroos in the same match, picking up four disposals and making three tackles in just 27 per cent game time after playing in 70 per cent of North Melbourne’s first hit-out two weeks ago.

Ex-Northern Knights ball-winner Brayden Fiorini (pick no.20, AFL Draft) made his first appearance for Gold Coast in the Suns’ three-point loss to West Coast in Joondalup on Thursday night. One of the TAC Cup’s most prolific midfielders last year, Fiorini managed four disposals in just 34 per cent game time. His 2015 Knights teammate Darcy MacPherson (pick no.21, Rookie Draft) also appeared for the Suns, recording four disposals from 61 per cent game time in his second pre-season match.

Finally, pacy utility Alex Morgan (pick no.29, AFL Draft) played his first game for Essendon in the Bombers’ 87-point defeat at the hands of Geelong in Shepparton on Saturday. The 2015 Oakleigh Chargers premiership player had six disposals in 52 per cent game time.

In other news about 2015 TAC Cup draftees, Carlton key-position player Harry McKay (pick no.10, AFL Draft) will be sidelined for the next three months with a back stress fracture. The former Gippsland Power and Vic Country goalkicker felt pain in his back at training on Saturday after appearing in the Blues’ second pre-season game the weekend prior.