Speed and agility tested at Combine 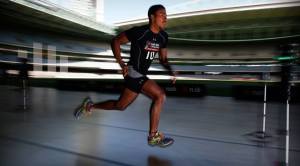 Day two of the NAB AFL Combine saw speed and agility as the key areas being tested at Etihad Stadium.

It was a long day of waiting for the Combine participants, after a fault with the 20m sprint equipment in the morning meant the 20m sprint and 30m repeat sprint went back to back later in the day.

American Marvin Baynham was the name on everyone’s lips after the sprints, recording a best time of 2.81 seconds – placing him in the top five of all-time best sprints, just six seconds behind the best mark set by former Gold Coast Sun Joel Wilkinson back in 2010 of 2.75. Baynahm, who at 198cm has played college basketball, American Football as well as athletics, recorded the best time just a day after smashing former North Ballarat player Dean Towers’ vertical jump record (85cm) with a standing jump of 88cm. also recorded a sub 2.9 time, coming in at 2.87

In the running vertical jump, with the two Americans Evan Bruinsma (97) and Baynham (95) setting the mark, Oakleigh Chargers Daniel McKenzie finished in third spot with 94, teammate Billy Gowers 93 and Murray Bushranger Nathan Drummond completing a top 10 finish in both jumps with 90.

Day 3 of the combine sees goal kicking, handball/clean hands and kicking accuracy, with the beep test to complete the day.

Follow @TACCup for full updates from the NAB AFL Combine.