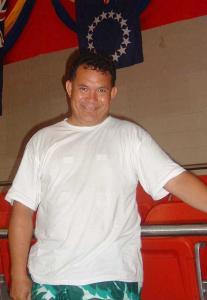 Netball may be perceived as a women's game in the islands, but that will not stop Teva Goldstein-Simiona from spreading the message that its all right too for men to play the game.

Goldstein-Simiona, a player and umpire from the Cook Islands, said the major stumbling block for men's netball in the islands is trying to muster support for the game from the public.

Netball in the Cook Islands is not a men's game. If parents see their kids play netball they get embarrassed or they tell their guys, that is not your game, he said.

Inspired by the level of participation at the International Men's and Mixed Netball Championship Challenge Cup in Suva, Fiji, Goldstein-Simiona said he would travel the 15 islands in the Cook Islands group to convince
more men to play the sport.

I know we have a lot of our guys want to play but they are too shy to come out to play the game, Goldstein-Simiona said.

He said his selling point, would be that professional rugby players, basketballers, volleyballers in Australia and New Zealand also play the sport off-season to maintain their physique, stimulate their ability to think during a game, and handling ball in the court.

He said they would approach the Australian men's netball body to seek assistance in properly introducing the sport to the Cook Islands and to raise the standard of the games.

We have asked [Australia] to provide us with some package to help us do some advertising, we can [also] convince our Cook Islands Sports and
Olympic Association that it is a game, also for men", he said.