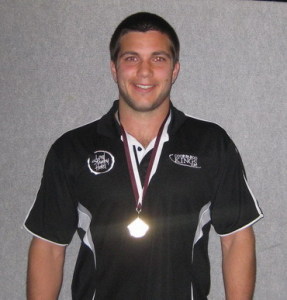 Adam polled all his votes early in the season, his form dropped off a bit in the last couple of rounds and he also sustained a knee injury that kept him out of the team. With no clear cut winner until the last round was played it was Adam that held on to win this year's medal by just two votes.

In Division two Daniel Milligan from Logan City took out the B&F in the seniors to make it a double for the club Mark Kennedy won the reserves grade B&F for the second year in a row. Ray Flux(Ipswich) and Matthew Brick (Robina) were aknowledged for reaching the 300 game milestone and Scott Young (UQ President was awarded the volunteer of the year award. A great night was had by all.