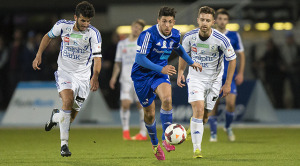 South Melbourne FC has lifted the inaugural NPL Victoria trophy in style with a dramatic 2-2 draw against Oakleigh Cannons on Sunday night at Lakeside Stadium.

A Milos Lujic header in the dying seconds of stoppage time ensured South Melbourne took a point from the game after trailing for much of the second half.

It was the hosts who very nearly took the lead in the opening moments through Tyson Holmes.

The attacking midfielder found space inside the area before slipping his left-footed effort just wide of the post.

The nine-time Victorian champion then thought it had taken the lead before the linesman flagged for offside, but didn’t have to wait long though for the opening goal with Jamie Reed slotting home in the 20th minute.

The former Chester City striker was played through brilliantly before calmly controlling the ball and finishing past John Honos to make it 1-0.

However, it was only a matter of seconds though before the visitors scored the equaliser.

Some quick thinking from the kick-off resulted in a long pass straight over the top to the running Nate Foster, who controlled the ball past Chris Maynard before slotting it home to make it 1-1.

The hosts almost re-took the lead in the 36th minute but Mathew Theodore struck his effort straight into the arms of Honos.

Oakleigh then took a shock lead in the 64th minute through Dusan Bosnjak who simply slotted home into the top corner, past Maynard from just inside the area to make it 2-1.

It was the introduction of Leigh Minopoulos which was telling though with the substitute almost grabbing the equaliser in the 84th minute, but for a brilliant diving save from Honos to keep it at 2-1 Oakleigh.

And just as it looked as if Oakleigh would spoil the party for the already crowned NPL champion, the NPL Victoria top scorer, Lujic, scored a dramatic equaliser.

With South pressing high, Minopoulos turned his man before forcing a brilliant save from Honos.

But with the goalkeeper on the ground the ball flicked up to Lujic was in the right place at the right time to head home into an empty net making, sending the home fans into delirium.

Minopoulos then almost grabbed a dramatic winner in the 94th minute but his effort was well saved from the edge of the area by Honos with the final whistle sounding just seconds later.

South Melbourne championship-winning coach Chris Taylor was pleased with the character his squad showed to equalise late on, before lauding the club and pledging more success in the future.

“I thought it was almost like a dead rubber and I think periods of the game showed that but I think we showed a bit of character at the end and I’m pleased that we got a point at least for all the people who came out here,” Taylor said.

“I think the success is a testimony to the club as a whole, we have all worked extremely hard and we want to put South Melbourne back to where it should be which is at the top level so I am delighted that we could win the championship which is what the club has deserved.

“We want to go for the championship again next year, we need to be up there every year and we all know how big South Melbourne is as a club so I am delighted with our efforts this season and we should be very proud of what we have achieved this year.”

Oakleigh Cannons defender John Black bemoaned his side’s lack of focus late on in the match but took solace in the fact that South Melbourne has yet to record a victory against his side this season.

“Spirits were still high in the rooms and I don’t think either side really played that well today but we really shouldn’t have lost that lead in the final minutes so it’s disappointing considering we were in a great position with just seconds to go,” Black said.

“At the end of the day they haven’t beaten us all year and congratulations to them for winning the title but we haven’t lost to them and I think that if we brushed up our performances in lesser games we could’ve been the champions, but that’s the way it goes.”