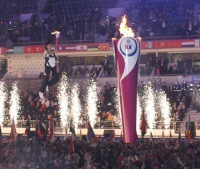 The ceremony took place with the participation of 90 countries and 3000 children yesterday 7 p.m in the evening.

The opening ceremony started with music and laser shows and then, all the countries carried out to march one by one. At the end of the ceremony, the torch was lit for the tournament. The children from 90 countries dance altogether at the end of the show.