Canada's Capital lights up for Footy! 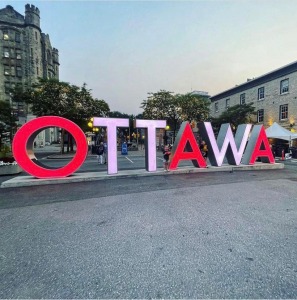 The City of Ottawa’s giant illuminated sign was lit up in red and white representing the Ottawa Swans, the capital’s Australian Football club.

The giant sign is located in the Byward Market, a central part of the city, and is generally adorned in various colors - but for last night the city had chosen to support the Ottawa Swans and Footy in Canada!

Members of the public spending the balmy evening walking around the market were greeted by members of the club who were keen the see their club colours on the big stage.

Club Director Rob Harbic had this to say about the opportunity for the club;

‘It was a unique opportunity to celebrate the club's past but also look to the future on the eve of announcing our first Auskick program.

With things in this part of the world opening up again, it felt like old times. We had people coming up and asking about us, and even met our first new registered Auskick kids who were out with their footies ready to go!’