Derek Govier appointed as Head of Umpiring in Canada 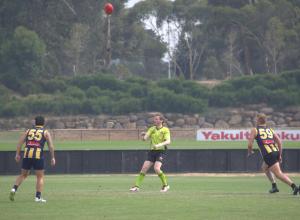 AFL Canada is pleased to announce that Derek Govier has been appointed as the Head of Umpiring in Canada.

After an extensive application process, the Board of Directors voted to appoint Derek to the role without opposition.

Derek started his umpiring journey in Ontario, both umpiring and playing in the AFL Ontario league. Derek was then awarded a scholarship to travel to Australia to build on his umpiring craft.

Derek spent that time in Melbourne umpiring a high level of football in the Essendon and District Football league, whilst receiving mentorship from elite level Umpire Coaches, including former AFL Umpires.

Derek’s experience in the AFL's umpiring development system mixed with umpiring a high level of Football in Australia made him the perfect choice to spearhead the development of umpiring in Canada.

AFL Canada’s Board of Directors is looking forward to working with Derek to take Australian Football Umpiring in Canada, to new levels.